ON THE 20TH MAY 1927, AT 7:52 AM, A MONOPLAN-MONOMOTOR TOOK OFF FROM ROOSEVELT AIRPORT IN NEW YORK, USA, WITH THE PURPOSE OF REACHING PARIS FOR THE FIRST TIME EVER WITHOUT A STOPOVER. PRECISELY 33 HOURS AND 30 MINUTES LATER – A result THAT WAS timed BY SWISS WATCHMAKER LONGINES- CHARLES LINDBERGH LANDED HIS “SPIRIT OF ST. LOUIS” AT LE BOURGET, AFTER ACCOMPLISHING THE FIRST NON-STOP TRANSATLANTIC SOLO FLIGHT. 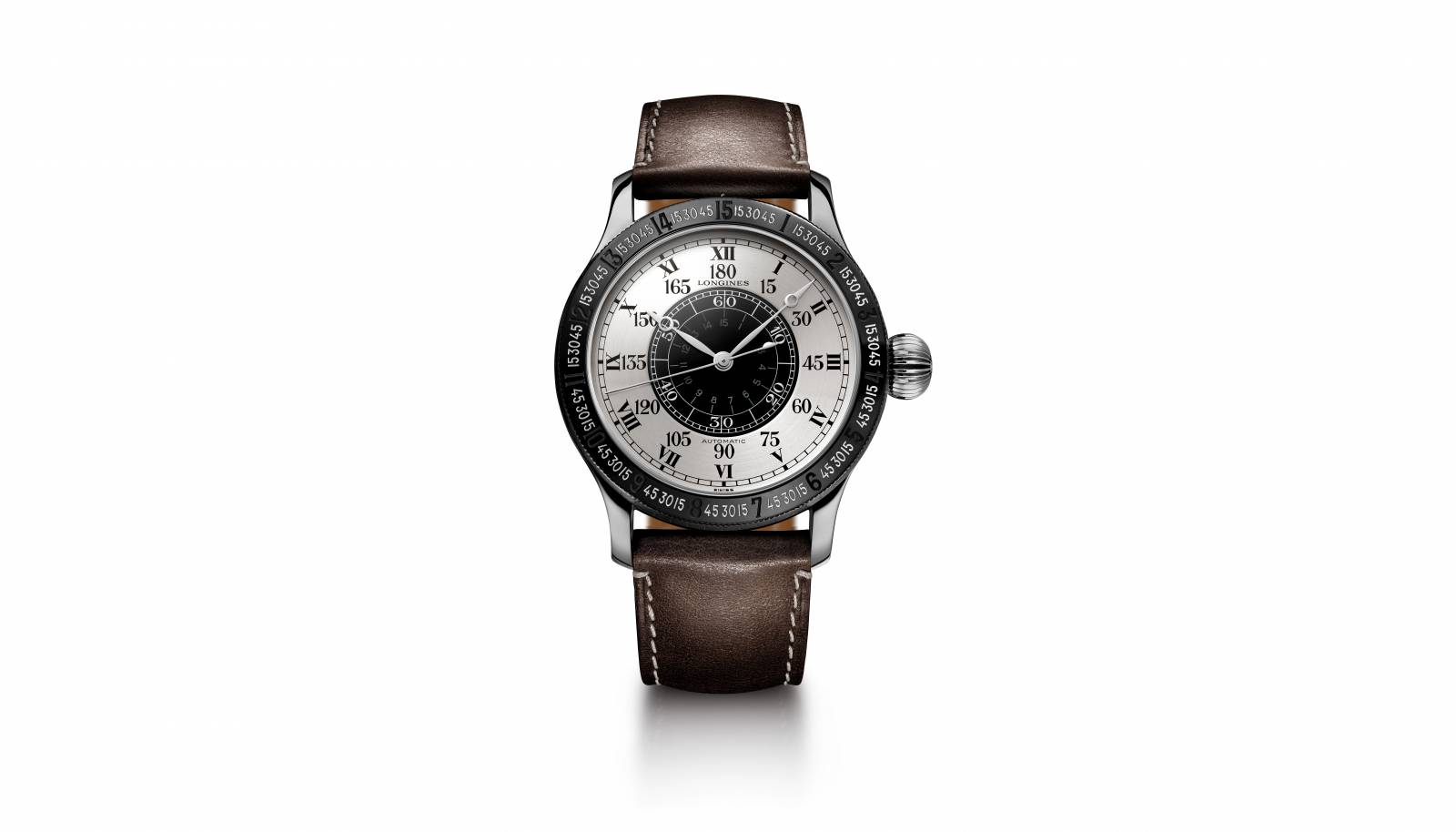 THIS YEAR LONGINES CELEBRATES THE 90TH ANNIVERSARY OF CHARLES LINDBERGH’S FIRST EVER NON-STOP SOLO TRANSATLANTIC FLIGHT TIMED BY THE SWISS WATCHMAKER WITH A LIMITED EDITION OF ITS ANGLE HOUR WATCH, DESIGNED IN PARTNERSHIP WITH THE AVIATOR.

The Lindbergh Hour Angle Watch has contributed to establishing plenty of air records on the wrist of aviation pioneers, like Clyde Panghorn and Hugh Herndon who, in 1931,...

To celebrate the 90th anniversary of Charles Lindbergh’s achievement, Longines launched this year The Lindbergh Hour Angle Watch 90th Anniversary. As official timekeeper of the Fédération Aéronautique Internationale (FAI), Longines had also participated to the homologation of this prowess by adding it to the air records list.
The Swiss watchmaker has just launched a titan and steel edition, numbered and limited to 90 pieces, of its former Hour Angle Watch, designed in partnership with the famous aviator after this historic flight.
In fact, a short time after this achievement, a close collaboration between the aviator and Longines led to the launch of the Hour Angle Watch that has in the meantime become one of the brand’s iconic timepieces. This watch made it possible to determine with precision the longitude for long-haul flights. Pilots and navigators could therefore find precise guidance in a quick and efficient manner. 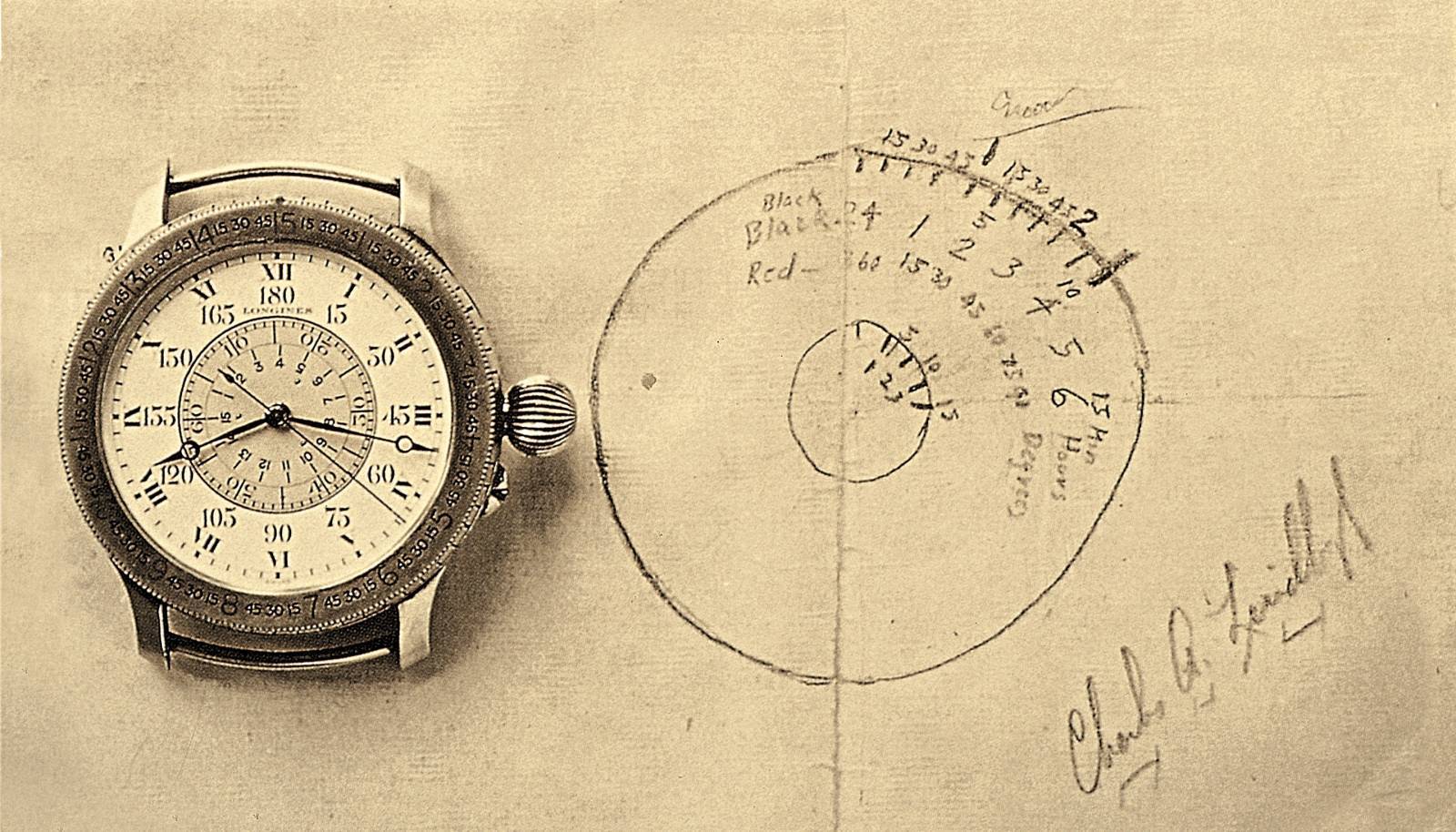 THE SKETCH OF THE LINDBERGH HOUR ANGLE WATCH THAT CHARLES LINDBERGH MADE AFTER HIS FLIGHT FROM NEW YORK TO PARIS. IT WAS BASED ON THIS SKETCH, THAT LONGINES PRODUCED THE WATCH.

The Lindbergh Hour Angle Watch has contributed to establishing plenty of air records on the wrist of aviation pioneers, like Clyde Panghorn and Hugh Herndon who, in 1931, managed to accomplish the first flight without stop-over on a monomotor between Japan and the state of Washington, in the USA, Amelia Earhart, who established in 1932 the women’s record of transcontinental and transatlantic solo flights, Amy Johnson and her speed and distance records that same year through a round-trip solo flight between England and South Africa, Paul Codos and Maurice Rossi who, in 1933, established a distance record flying from New York to Syria, Wiley Post who did the solo tour of the world in 7 days, 18 hours and 49 minutes, or Henry T. Merrill and Jack Lombie whose round trip New York- London-New York in one day lighted up everybody's dreams on each side of the Atlantic. 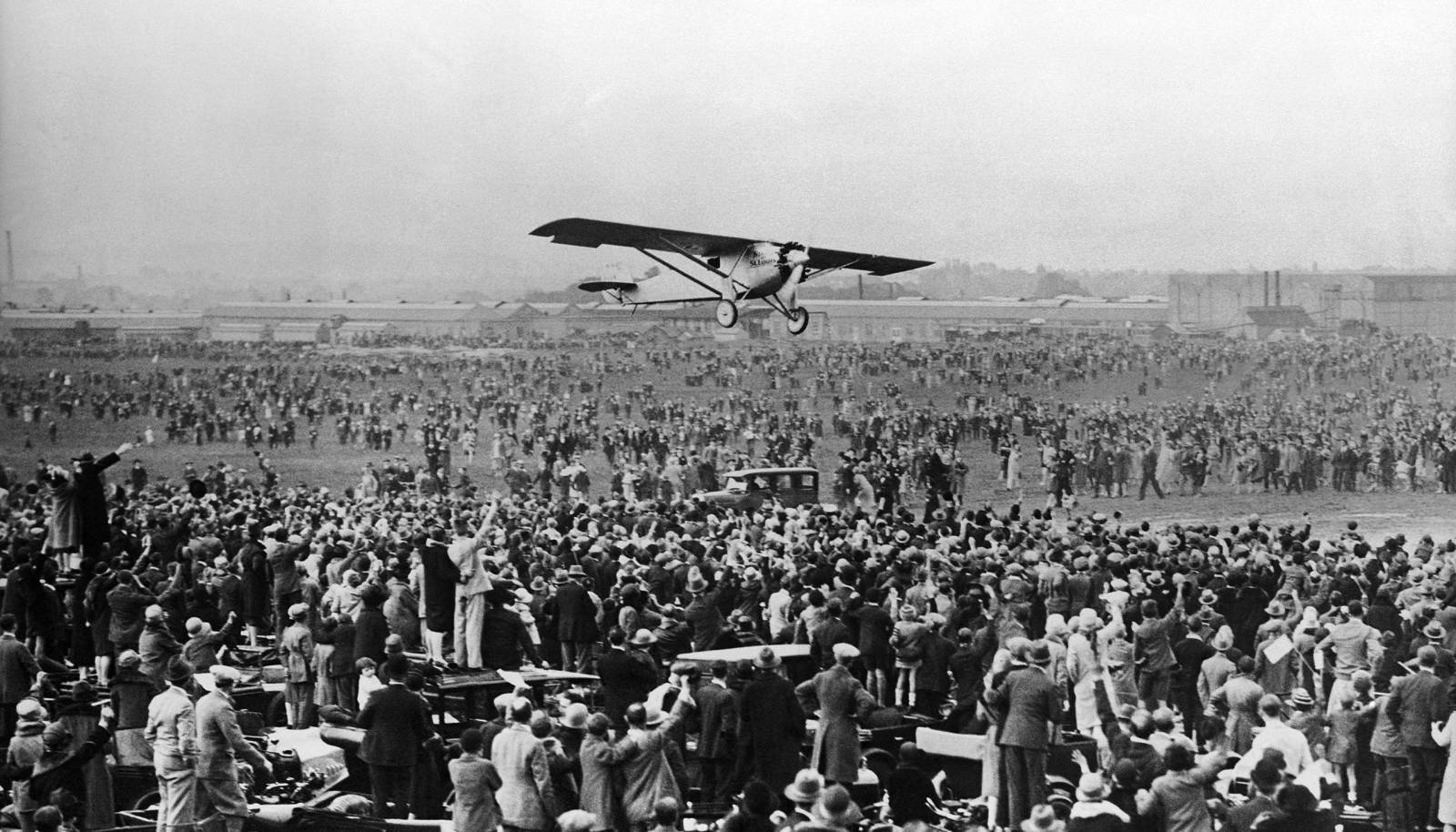 As impressive as the original timepiece, the new 47,5 mm model – a size that facilitated reading and manipulation in the darkness under the effect of the airplane’s vibration back then – is equipped with a rotating bezel to adjust the daily variation of the equation of time and of a mobile central dial for synchronisation of the seconds’ hand. This timepiece shows, beyond hours, minutes and seconds, the hour angle in degrees and arc-minutes.
The brushed silver dial displays the time on a rail track minute circle with painted black Roman numerals, and features a 180° scale for calculating the longitude. The watch can therefore be used to indicate the hour angle in degrees and in minutes of arc, while displaying the current time in hours, minutes and seconds. 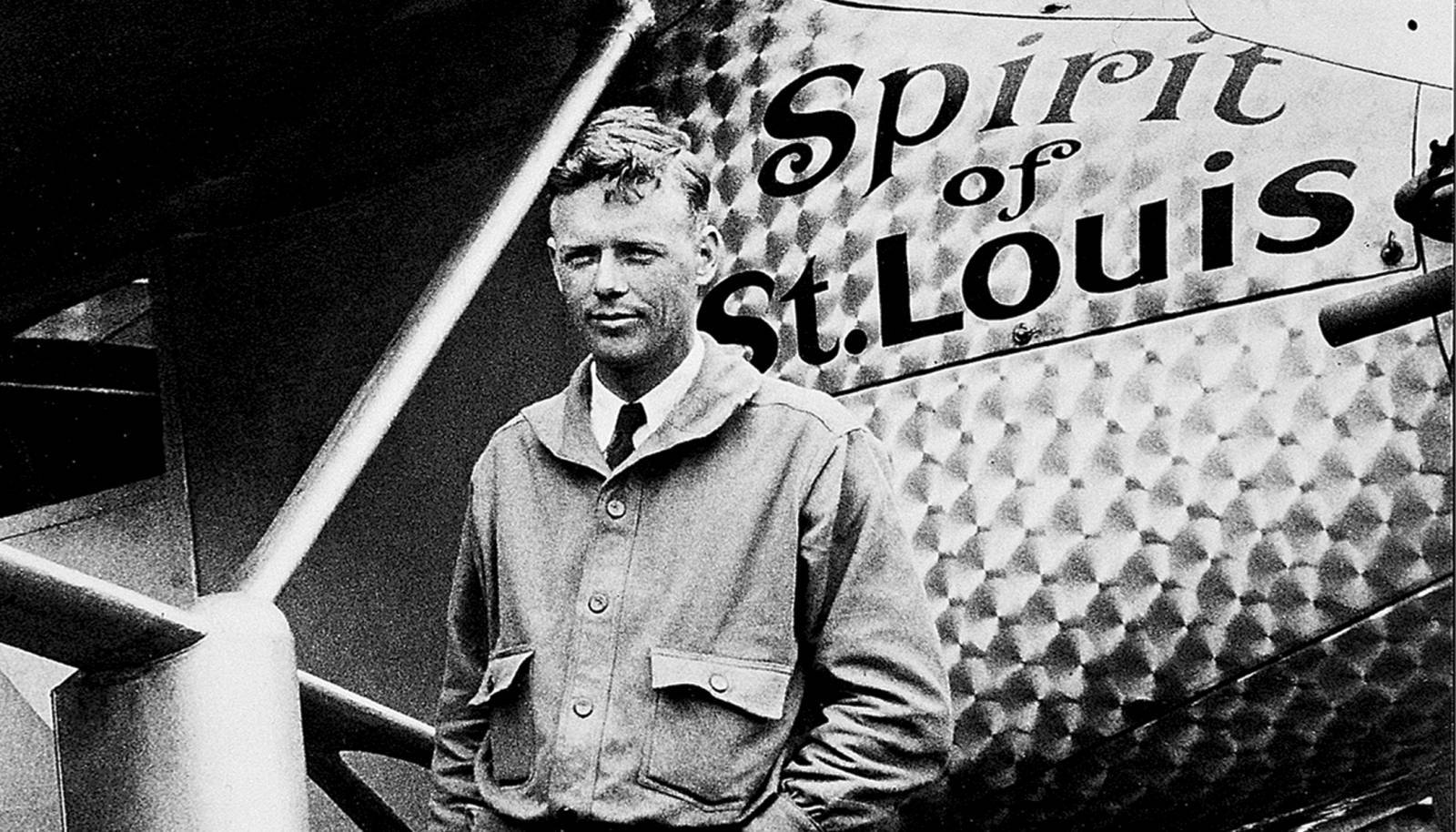 CHARLES LINDBERGH WAS THE FIRST AVIATOR TO CROSS THE ATLANTIC OCEAN ON A NON-STOP SOLO FLIGHT CONNECTING ROOSEVELT FIELD (NEW YORK) AND LE BOURGET (PARIS) ON THE 20TH AND 21ST MAY 1927, ON BOARD HIS AIRPLANE “THE SPIRIT OF SAINT LOUIS”. FOLLOWING THIS ACHIEVEMENT, HE MADE A SKETCH OF THE HOUR ANGLE WATCH THAT WAS THEN MANUFACTURED BY LONGINES.

The rotating bezel, made of black PVD steel, allows the wearer to adjust for the daily variations in the equation of time (the difference between real solar time and average solar time used in measuring time), while a galvanic black disk in the center of the dial rotates to synchronize the seconds with a radio time signal.
A caliber L699 hides inside the titan case and the large, steel crown allows for easy winding of the movement, even while wearing gloves. An aviator-type brown leather bracelet equipped with an extension allows the watch to be worn over an oversized aviator’s jacket. No doubt a collector’s timepiece. 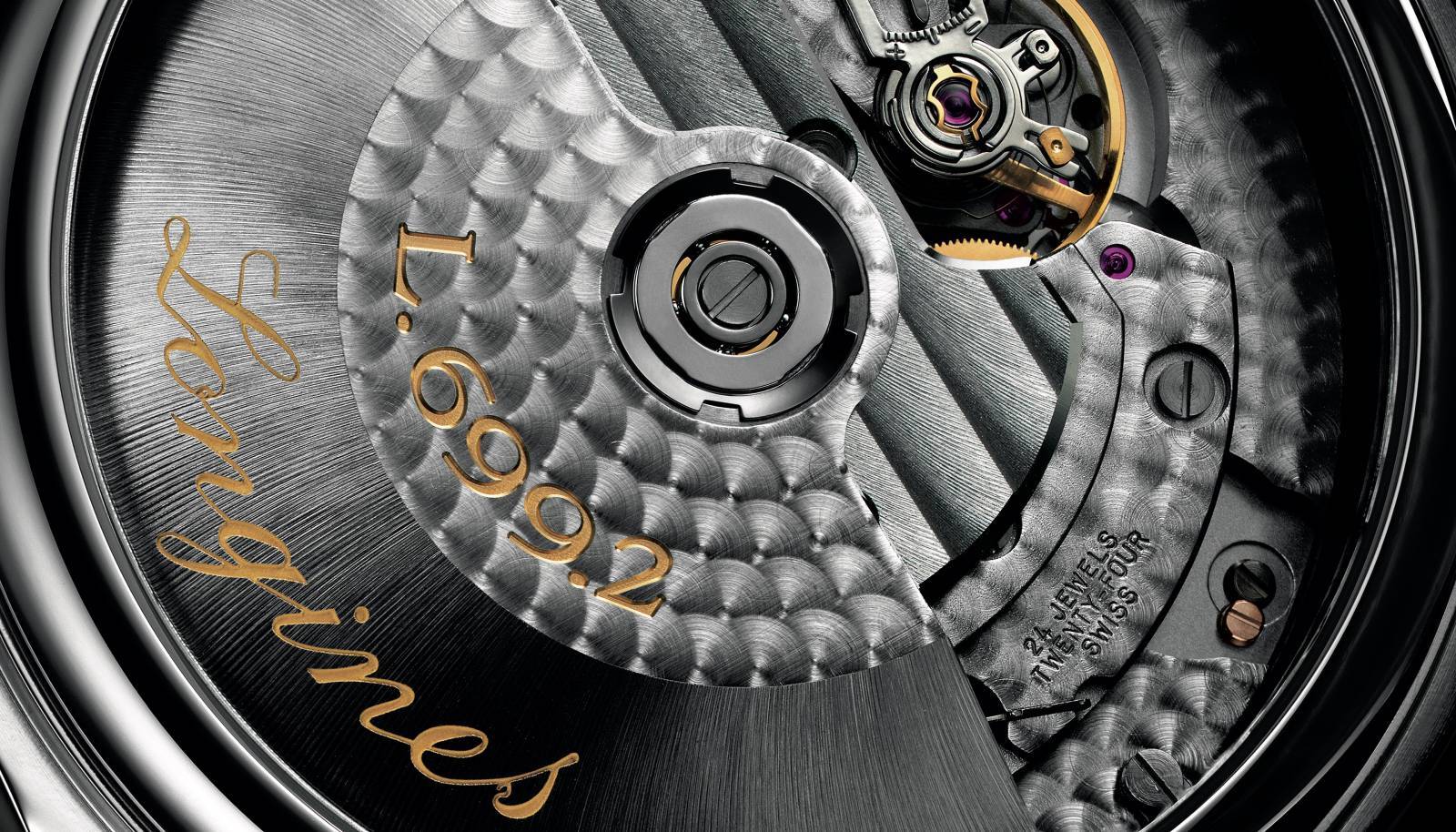 WITH HITS 46 HOURS OF POWER RESERVE, THE L699 CALIBER GIVES THE NEW LINDBERGH WATCH A POWER RESERVE THAT IS LONGER THAN THE TIME IT TOOK CHARLES LINDBERGH IN MAY 1927 TO FINISH HIS HISTORIC FLIGHT. 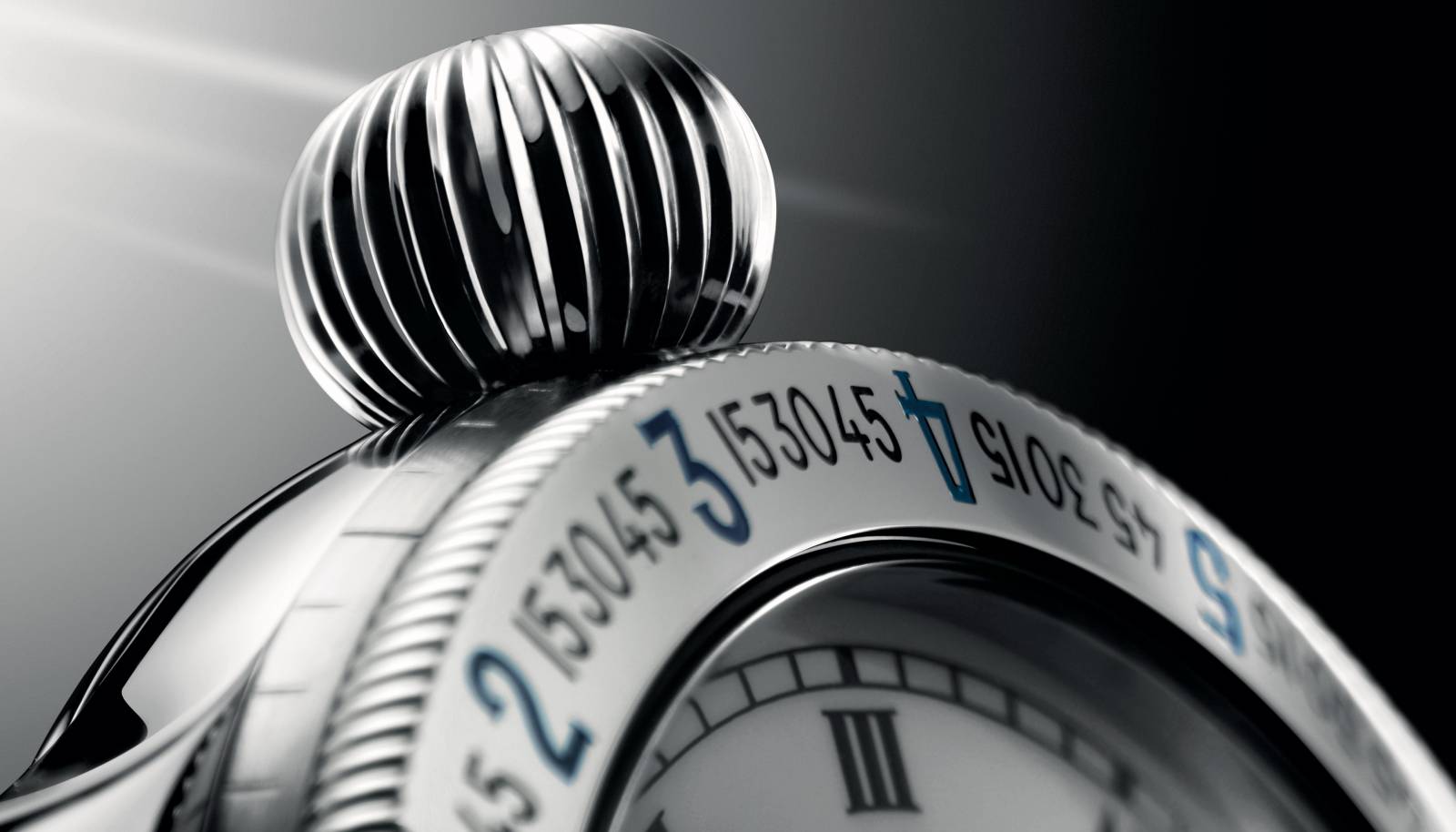 At the beginning of the century, the large steel crown, on a Louis XV style, of the Hour ANGLE Watch offered a sure grip even while the pilots were wearing gloves. Nowadays it offers its wearer a perfect manipulation.