One horse, three men, one legend...

It is impossible to tell the story of Seabiscuit without mentioning the three men who accompanied the champion racehorse throughout his career. With the odds stacked up against them, the unlikely quartet managed to defy fate and prove everyone wrong...

One horse, three men, one legend...

It is impossible to tell the story of Seabiscuit without mentioning the three men who accompanied the champion racehorse throughout his career. With the odds stacked up against them, the unlikely quartet managed to defy fate and prove everyone wrong... 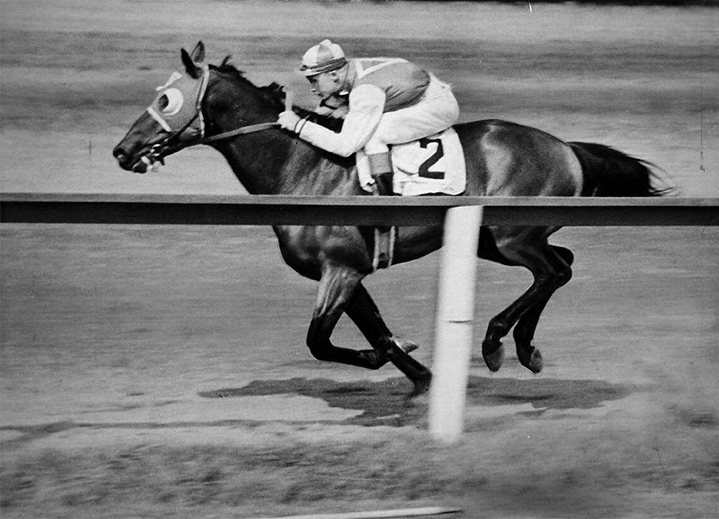 No one expected much from such a puny horse, standing no taller than 1.52 m. Obstinate and lethargic, the knobby-kneed colt was foaled in Kentucky in 1933, as the Great Depression ravaged the United States. Of course, a storied lineage lay behind the ornery stallion: his grandsire was none other than Man o’ War, the legendary horse who claimed title after title throughout the 1920s.

Seabiscuit, on the other hand, gained an early reputation for his staggering apathy. He ran the tracks with so little conviction that, eventually, no one wanted anything to do with him. So much so that his owner struggled to find a buyer when it came time to sell the horse. And yet, the new owner and his team managed to transform the hapless racehorse into a winner. Even a legend... 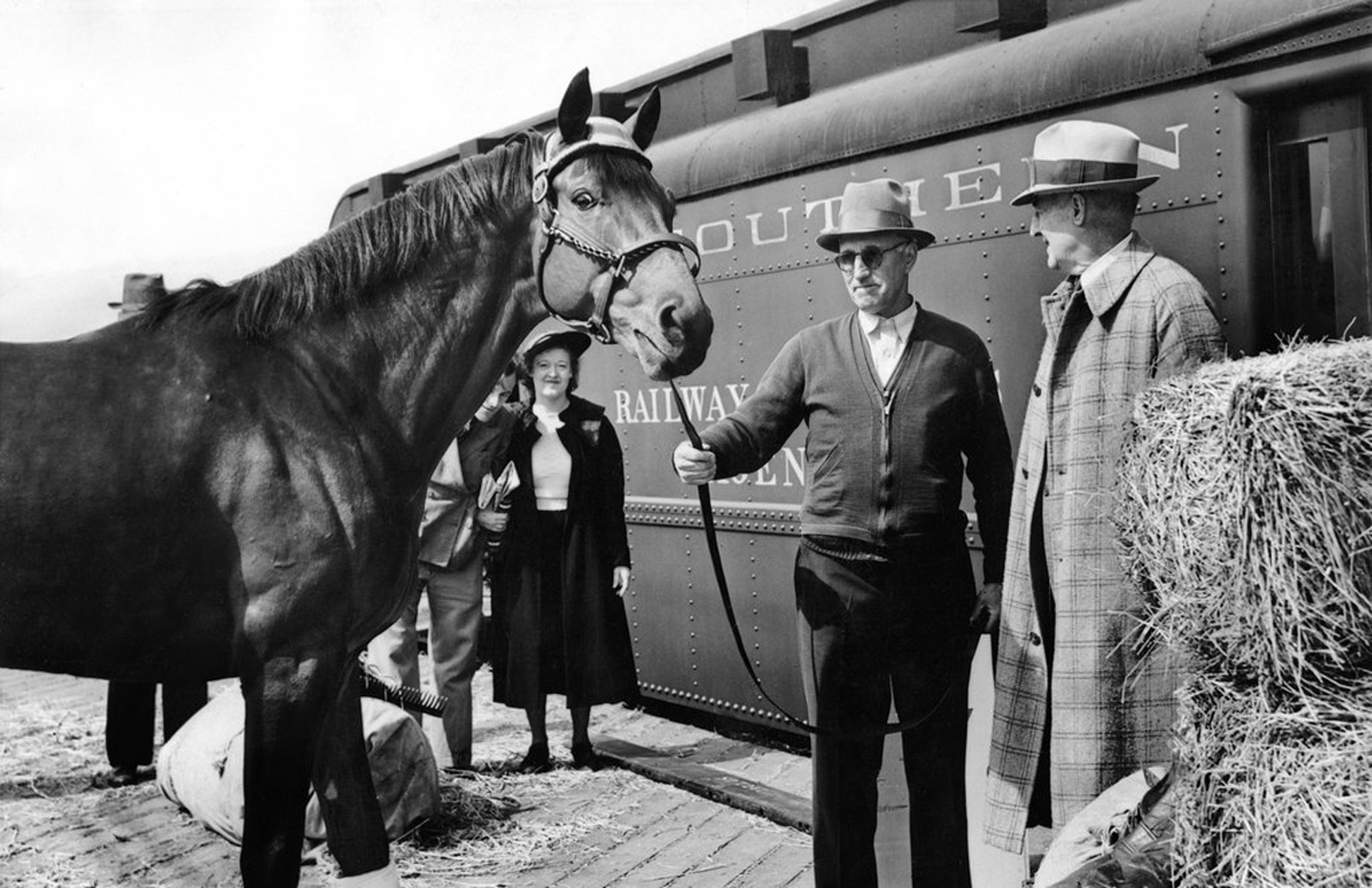 ... Seabiscuit saw his name writ large atop the standings at every major racetrack...

Seabiscuit’s new family concealed several deep scars. Charles Howard, who acquired the horse, was a businessman who, in a sense, fell victim to his own success. Arriving in California in 1903 with just 21 cents in hand, he got his start fixing bikes before taking his chances in the nascent automobile market. But for years his fleet of Buicks did little more than gather dust in the showroom… That is until a history-making earthquake rattled San Francisco in 1906. After municipal horses, frightened by fires raging all around town, refused to race to the rescue of local residents in distress, the flattened city transformed Howard’s cars into ambulances.

That move delivered just the marketing tool the automobile market needed to boost its appeal. Now selling by the thousand, cars quickly turned Howard into a very wealthy man. However, in a sick twist of fate, motor vehicles would also claim Howard’s son, who lost his life several years later in a deadly tractor accident on the family ranch… To tend to his emotional wounds, the rich entrepreneur decided to abandon the object of his fortune and devote his life instead to real horse power. 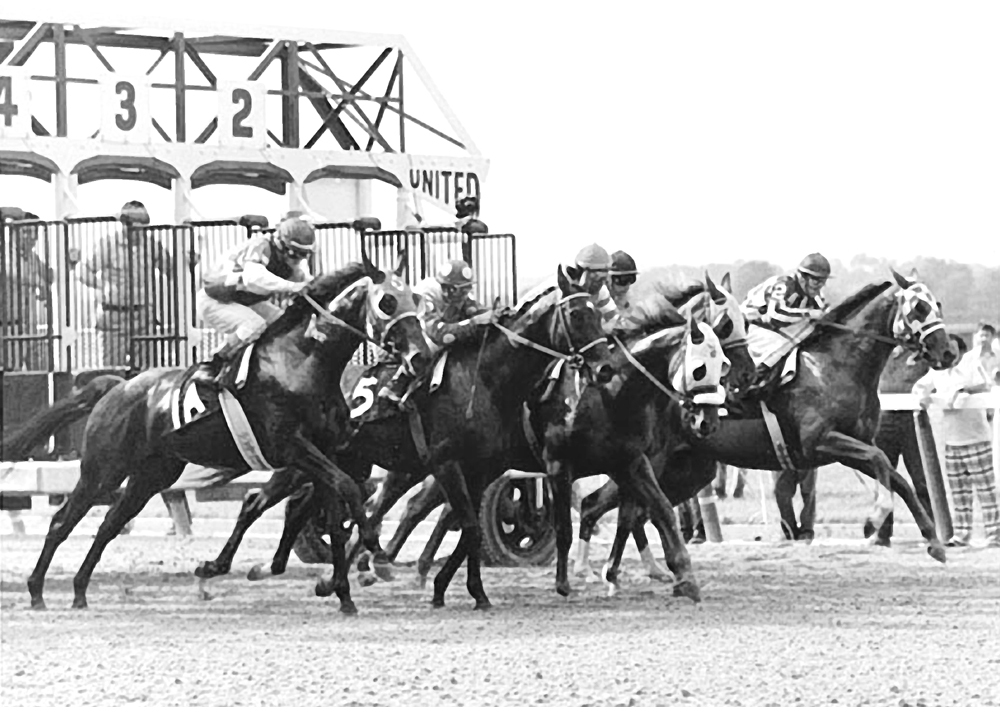 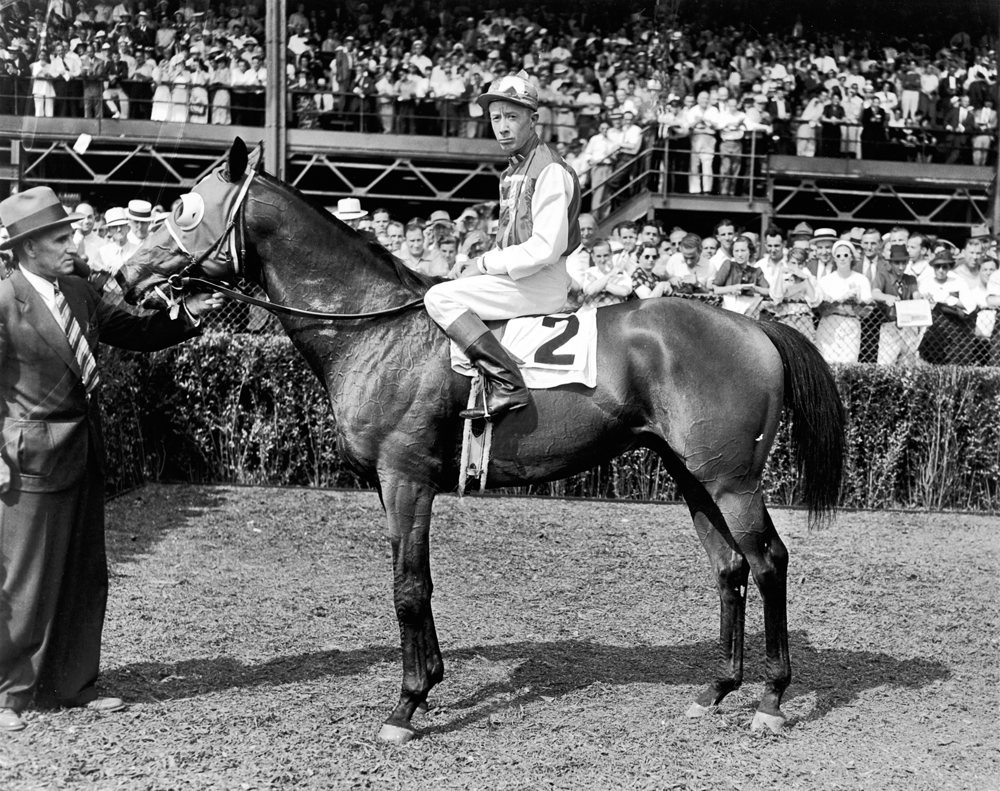 Charles Howard purchased Seabiscuit in 1936, for a price of $8,000, quite the pretty penny at the time. Especially for a horse with such dim prospects… The advisor behind this risky acquisition was Tom Smith, the trainer in charge of all of Howard’s horses. Smith saw Seabiscuit on the track and detected an untapped potential in the horse. A tight-lipped and mysterious fellow, the trainer had earned a reputation as a horse whisperer. Some even say that when Seabiscuit met Smith for the first time, he nodded his head in salutation. While that story undoubtedly belongs to legend, one thing is certain: history proved Howard right for trusting in Smith’s judgment!

To steer Seabiscuit, Howard relied on an odd duck of a jockey by the name of Johnny Pollard, nicknamed “Red” for the color of his hair. Forced to navigate the dismal economic crisis by dint of his resourcefulness alone, Pollard made a living as a boxer before becoming a jockey, despite his relatively large stature. Over the course of breaking so many capricious horses, Pollard lost vision in his right eye. For the rest of his career, he kept this infirmity a secret so that he could remain on the racetracks. His drinking habit, on the other hand, attracted much more attention… Out of work and on his own, Pollard had all but given up on himself when fate smiled upon him, setting him on a path to Tom Smith, then on the hunt for a tenacious jockey to break Seabiscuit. Legend has it that during the first encounter between man and beast, the horse rested his head lightly upon the shoulder of his future jockey, as though to express his approval. 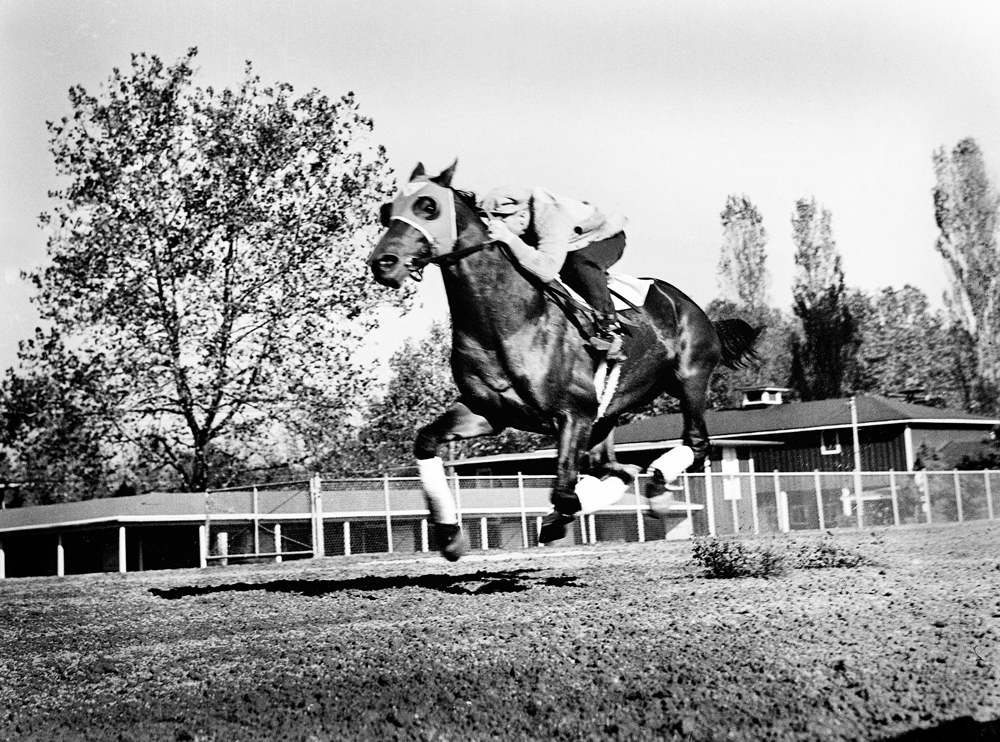 The horse and his improbable trio of human masters rapidly amassed a string of landslide victories on the tracks. With each spectacular win, Seabiscuit saw his name writ large atop the standings at every major racetrack. All that remained was to face off against the other frontrunner of the era: War Admiral. The battle of the beasts took place on November 1, 1938 at Pimlico Race Course in Baltimore. After suffering consecutive bad falls, Pollard was forced to yield his saddle to his friend George Woolf. Droves of spectators lined up for the race: more than 40,000 people packed into the grandstands to witness what was dubbed the “Match of the Century”, while millions more listened to the race at home, ears glued to the transistor.

The two horses thundered into the first turn, neck and neck. But at the end of the home stretch, War Admiral, the unanimous favorite, crossed the finish line a full four lengths behind the magnificent Seabiscuit… In 1940, Red Pollard, back on his feet, climbed once more into the saddle atop his lucky horse. Seabiscuit and his jockey soon galloped back into the winner’s circle, notably winning the prestigious Santa Anita Handicap, before nearly 80,000 fans present to cheer Seabiscuit on to victory.

That would turn out to be his last race, as the mighty steed retired to Charles Howard’s Ridgewood Ranch, in California. On the morning of May 17, 1947, Charles’s wife Marcela cried out for her husband. Seabiscuit had passed away, at the young age of 14. Charles buried the horse discreetly on his property, planting an oak tree at his grave. He kept the burial site a secret, as though to carry with him the memory of this legendary racehorse, whose career was as tumultuous as it was extraordinary. A horse most certainly born under a lucky star... 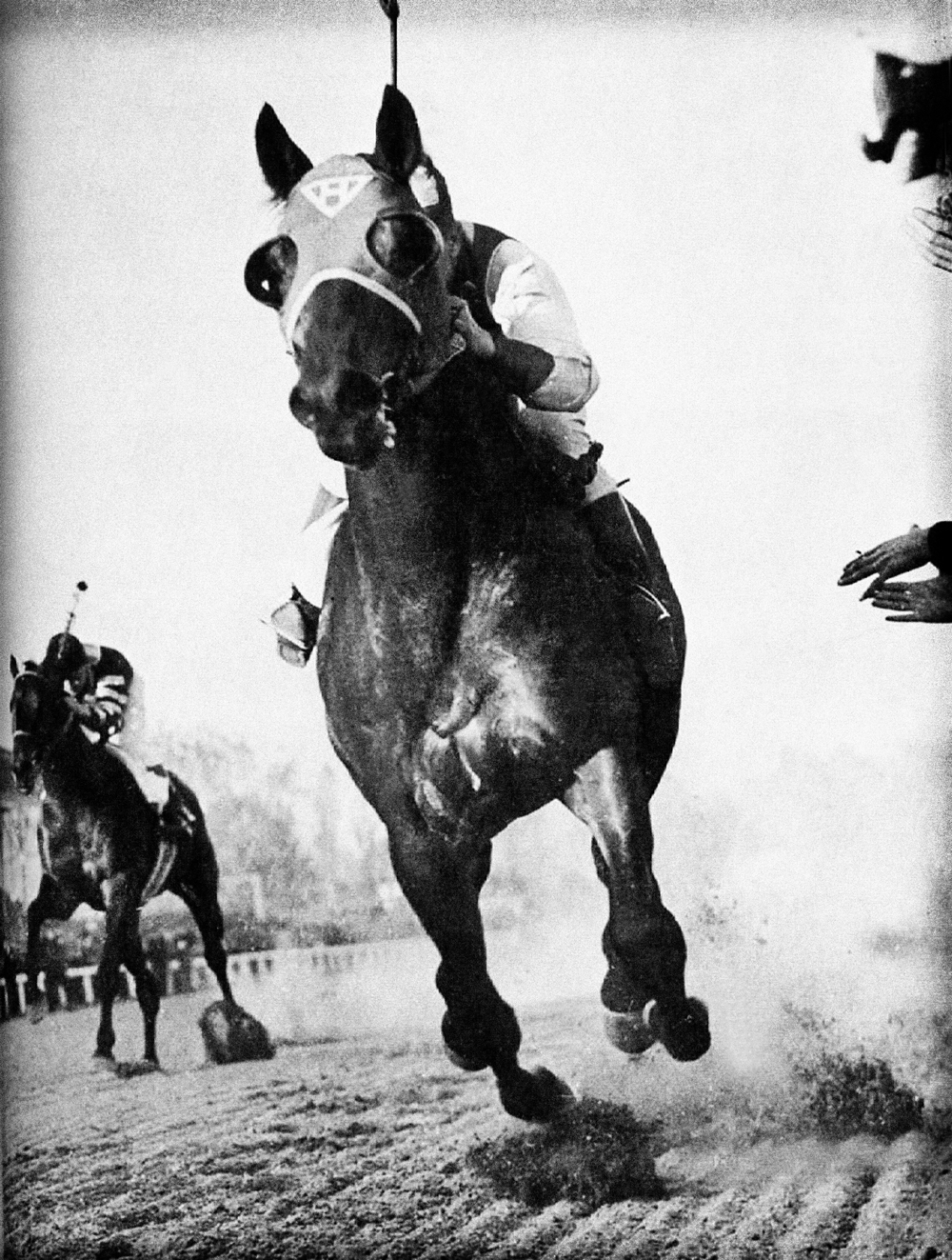