A child-like smile and a dreamy gaze: these two characteristics perfectly sum up the personality of Amelia Earhart, a woman of youthful unconcern. A girl with a tomboy streak, who never shied away from danger. A tenacious character, which prompted this woman to accomplish feats in a field which was, at the time, only in its infancy: aviation.

A child-like smile and a dreamy gaze: these two characteristics perfectly sum up the personality of Amelia Earhart, a woman of youthful unconcern. A girl with a tomboy streak, who never shied away from danger. A tenacious character, which prompted this woman to accomplish feats in a field which was, at the time, only in its infancy: aviation.

In 1928, Amelia became the first female passenger on a transatlantic flight. Four years later, she was the first woman to fly solo across the Atlantic Ocean. In 1935, she became the first woman to fly alone to the United States from the island of Hawaii. Two years later, she realised her dream: embarking on a round-the-world trip on board a Lockheed Electra. It ended in tragedy, but no one could have stopped this woman from living her life as she wanted to. A passionate and excessive figure who was expected to live a simple, well-ordered life in a small town in the middle of the great puritan America. The story of a unusual destiny. 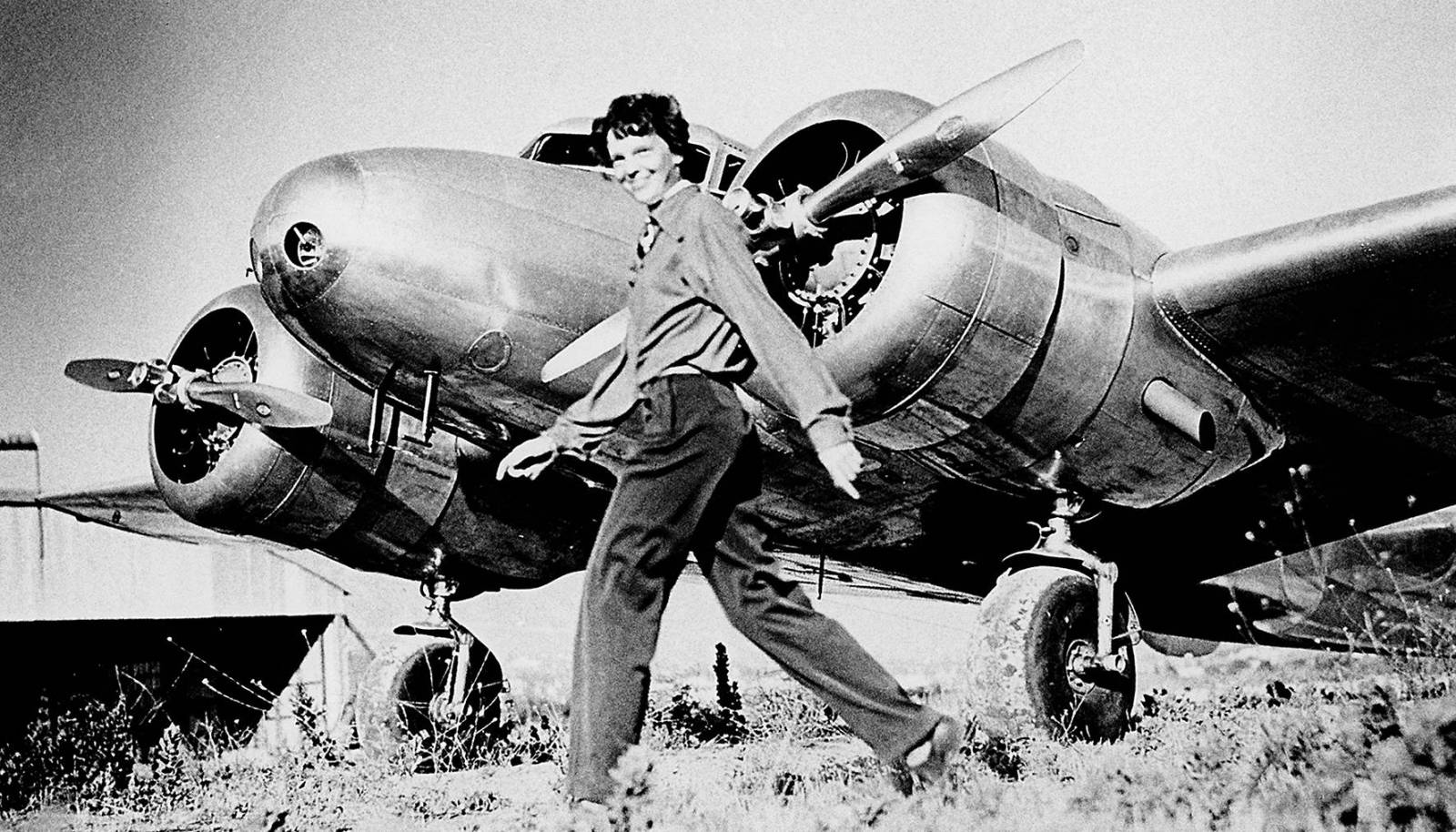 Little Amelia was born at the dawn of 20th century: on 24 July 1987. The family home was situated in Kansas City, but Amelia and her sister Muriel spent a large part of their childhood with their maternal grandparents, in Atchison County, on the banks of the Missouri river. The house, perched on the western bank of the river is today a museum (www.ameliaearhartmuseum.org).
In primary school, the young girl demonstrated a strong character and a very independent nature. It was already clear that she would not be a servile, unassuming wife, as was expected by American society at that time. From a very young age, Amelia was already fascinated by mechanical structures, she took part in male sports and dreamed of wide open spaces. 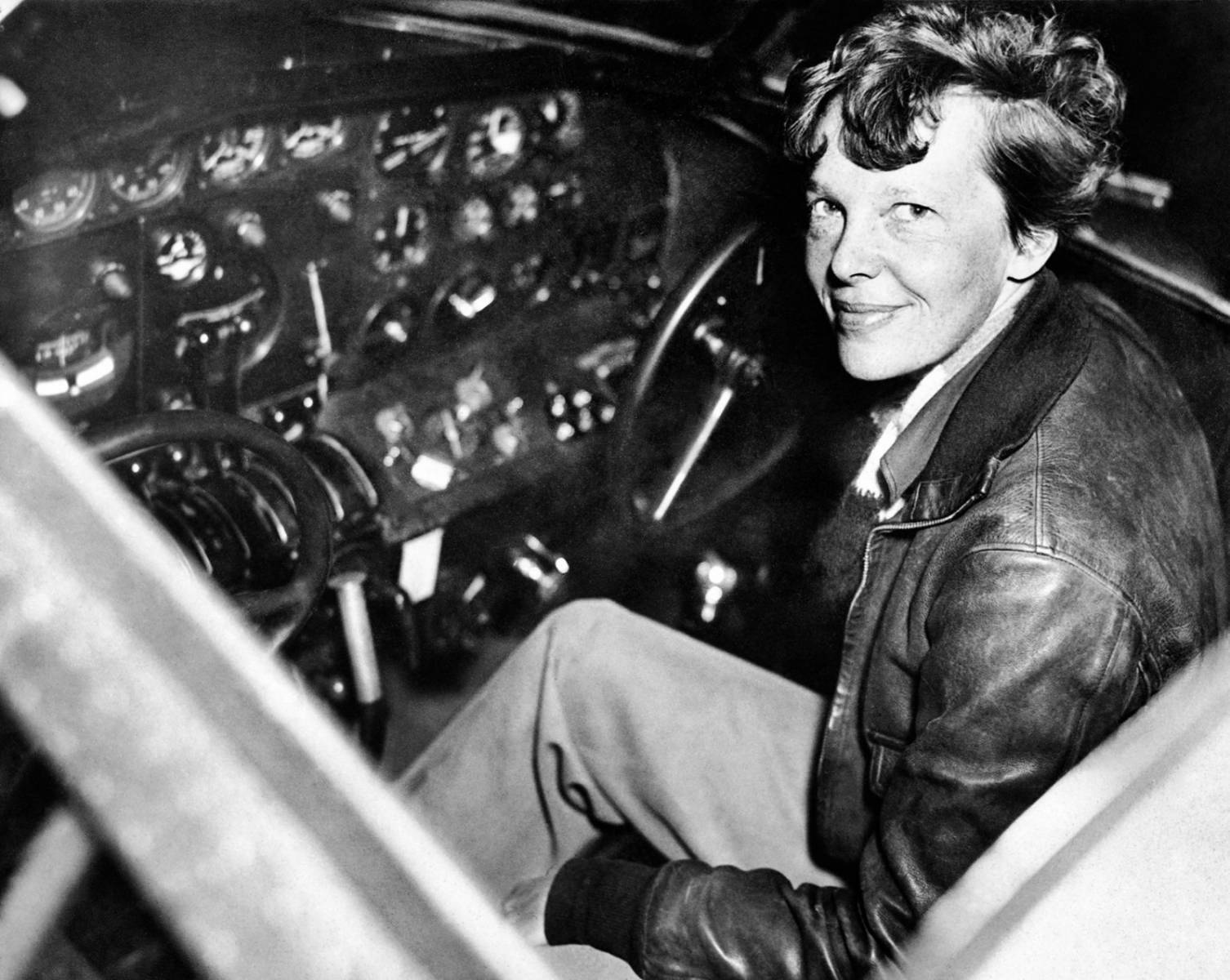 On 28 December 1920, when Amelia had joined her parents in California, her father took her to an air show in Long Beach, where she met the pilot Frank Hawks who took her up in the air. This 10-minute flight, which cost her father 10 dollars, was her first aeronautical experience. "When we reached a height of two or three hundred feet, I knew that I had to fly", Amelia said later.
She was well and truly bitten by the aviation bug. To pay for her initial flying lessons, she did a series of small jobs. And on 3 January 1921, with 1,000 dollars in her pocket, she began her lessons. Her instructor was called Anita "Neta" Snook and she flew a Curtiss JN-4. Six months later, Amelia bought her own machine: a yellow, second-hand Kinner Airster which she nicknamed "the canary". On 22 October 1922, Earhart pushed this aircraft to an altitude of 4,300m, setting a world record for a female pilot.

According to the experts, Amelia was not a particularly talented pilot when she started out. But she was always brave and adventurous which enabled her to establish a series of records. She also tackled the job of enhancing the status of female pilots, particularly through the "Ninety-nines", an association of 99 female pilots, of which Amelia was the first president in 1930.
As for the records, the first was only half a record in Amelia's eyes: in 1928, she became the first woman to cross the Atlantic, but only as a passenger, during a flight organised by her future husband, the publisher George Putman. The pilot Wilmer Stultz and his co-pilot Louis Gordon took their Fokker F.VIIb from eastern Canada to Wales in 20 hours and 40 minutes. "Stultz did all the work; I was merely baggage, like a sack of potatoes. Perhaps I'll try it solo one day", she is said to have declared on landing.
In any event, she was given a rousing reception when she returned to the United States, and she gave a series of lectures about her experience. George Putman, like any good promoter, presented the image of the female aviator to the public by creating a whole range of merchandise around her name, including a range of women's clothing. On 7 February 1931, Amelia married her publisher. It is said that he had to ask her 8 times before she accepted. Marriage was only mildly attractive to this freedom-loving woman. 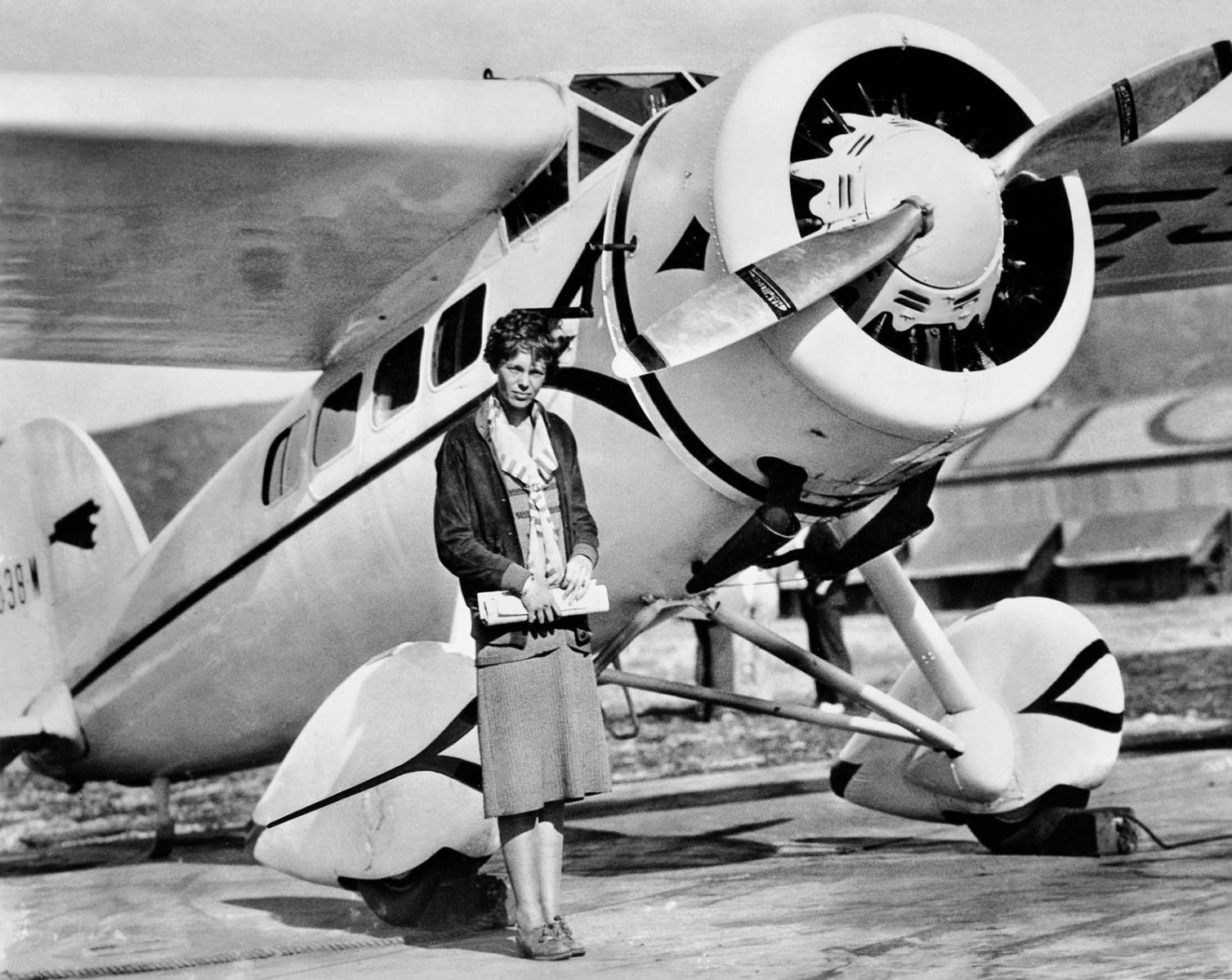 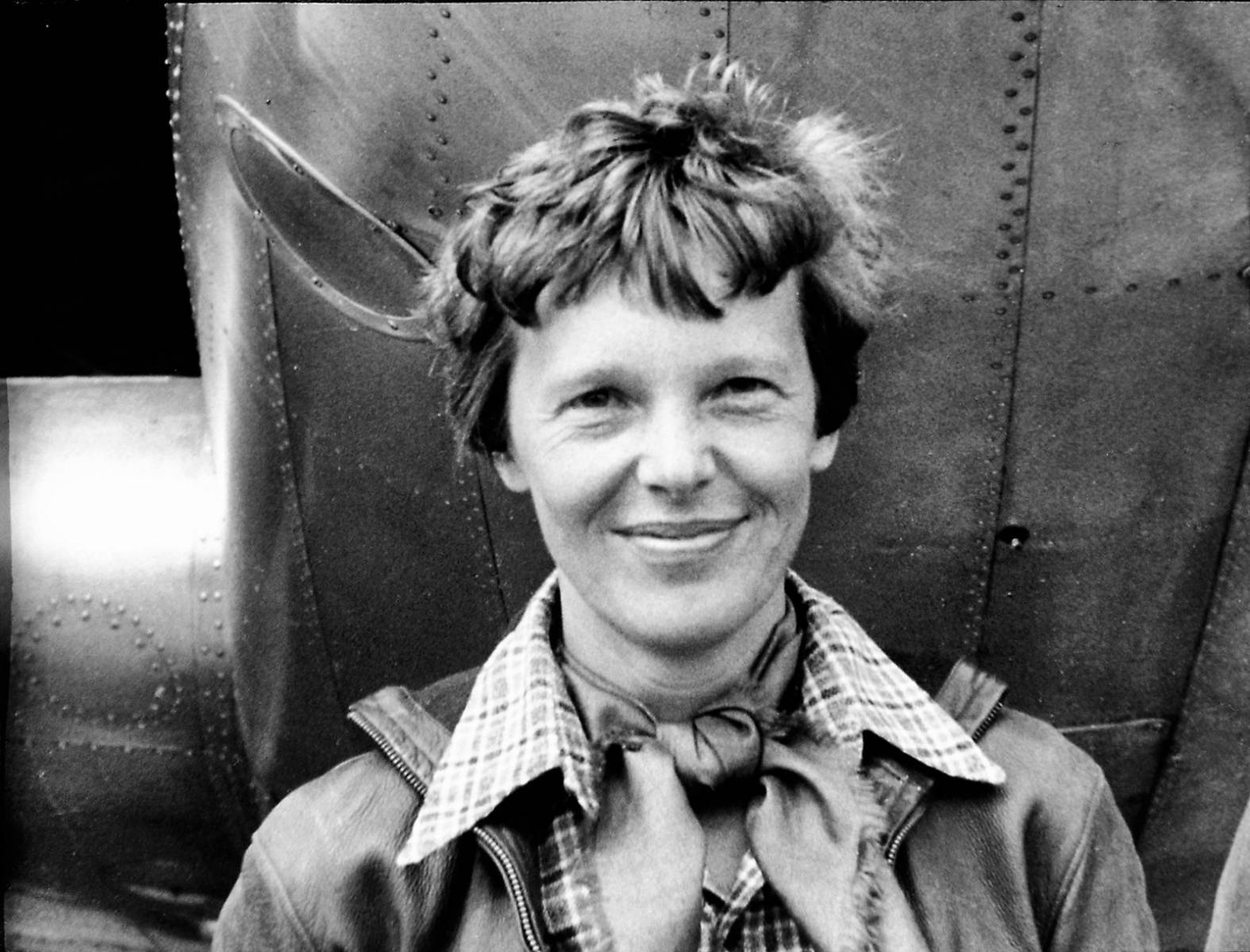 Amelia, it seems, had bitter memories of her first Atlantic crossing. Her fiery nature could not be satisfied by a passenger status. She, whom the media nicknamed Lady Lindy (on account of the passion she shared with Lindbergh and also a certain physical resemblance to him), wanted to do this transatlantic flight solo. And so, at the age of 34, on the morning of 20 May 1932, Amelia took off from the Harbour Grace airfield, in eastern Canada, aboard her Lockheed Vega 5b. Her goal was to reach Paris. After a flight punctuated by mechanical worries and changeable weather conditions, she landed, due to a lack of fuel, in a field in Northern Ireland, after flying for 14 hours and 56 minutes. This made her the first woman to fly solo, non-stop, across the Atlantic, only 5 years after Charles Lindbergh. This feat did not dampen the ardour of Amelia, who continued to set records. But her ultimate goal was on a much grander scale: to fly round the world.

Flying over the globe

It was thanks to funding from the University of Purdue, in Indiana, that Amelia took possession of a Lockheed Electra 10 in which she embarked on her world trip in 1937. It was not the first such trip in that period, but was certainly the longest. Round-the-world trips took place within the northern hemisphere, whereas Amelia decided to travel round the world from east to west, following the line of the equator, in other words a distance of 47,000 km. After an initial failed take-off in March, which damaged the aircraft, the epic journey was postponed to 1 June and eventually took place from west to east for meteorological reasons.
Amelia set off with a single passenger, the navigator Fred Noonan. They took off from California and headed east. The crew flew over South America, Africa, India and Asia without any problems. After a stopover in New Guinea (Indonesia), the pair took to the skies in the direction of Howland, a small island in the middle of the Pacific Ocean, roughly half way between New Guinea and Hawaii. Earhart and Noonan were, therefore, close to their return point, which was in Oakland, California. They had covered a little over 35,000 km when they approached the island of Howland, on 2 July 1937. 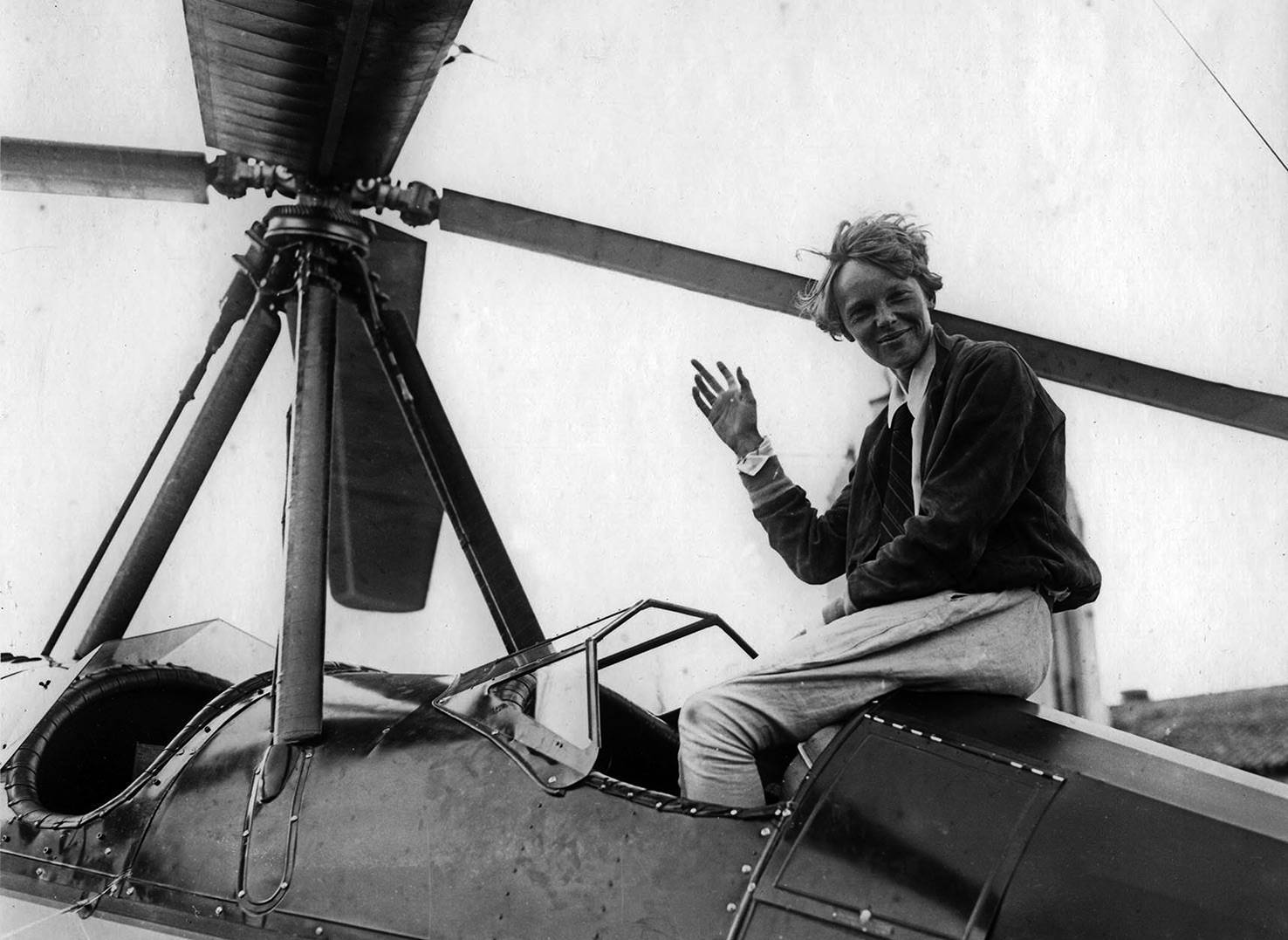 All of Amelie Earhart's achievements have been timed by Longines, official timekeeper of The World Air Sports Federation.

The crash and the speculation

The journey between New Guinea and Howland was just over 4,000 km. But Amelia and her navigator never managed to find this little island, lost in the vastness of the Pacific. Radio contact between the boat Itasca, dispatched by the US Coast Guard in Howland, and the plane was problematic, which prevented effective guidance. However, Amelia must have been close to the island, as is indicated by the radio signals. The aircraft circled for at least an hour in an uncertain area near the island before contact was totally lost. The American government then launched a huge search operation in the area surrounding the island, involving around ten ships and more than sixty aircraft! But their efforts were in vain. Amelia and Fred were never seen again.
In the absence of any remains, this disappearance fuelled much speculation. Some people claimed that the crew were on a spying mission on behalf of the American government and that their job was to photograph the Japanese installations in the Pacific. According to that theory, the aircraft had been captured by the Japanese.
The least controversial theory is that of a navigation error, followed by the plane running out of fuel over the ocean. One of the final messages received by the ship Itasca tends to confirm this hypothesis: "We ought to be above you, but we can't see you. The fuel is starting to get low", Amelia had indicated on the radio.
Did the aircraft crash into the sea or on an island? The organisation known as The International Group for Historic Aircraft Recovery (TIGHAR) leans towards the second scenario: in its view, the Lockheed crashed on a deserted island in the Republic of Kiribati, situated around 500 km south of Howland. The expeditions carried out by TIGHAR reveal the presence of wrecks at the site. As for the Lockheed, it was, they say, carried away by the waves, which would explain the lack of any evidence of the plane. Reality or speculation? What is certain is that the story of Amelia continues to intrigue and fire the imagination.