From mid-June, the Domaine de Chantilly will host its first ever exhibition dedicated to horse racing, in association with watch brand Longines. This is certainly an original approach to a fascinating world, set at the heart of all things equestrian. 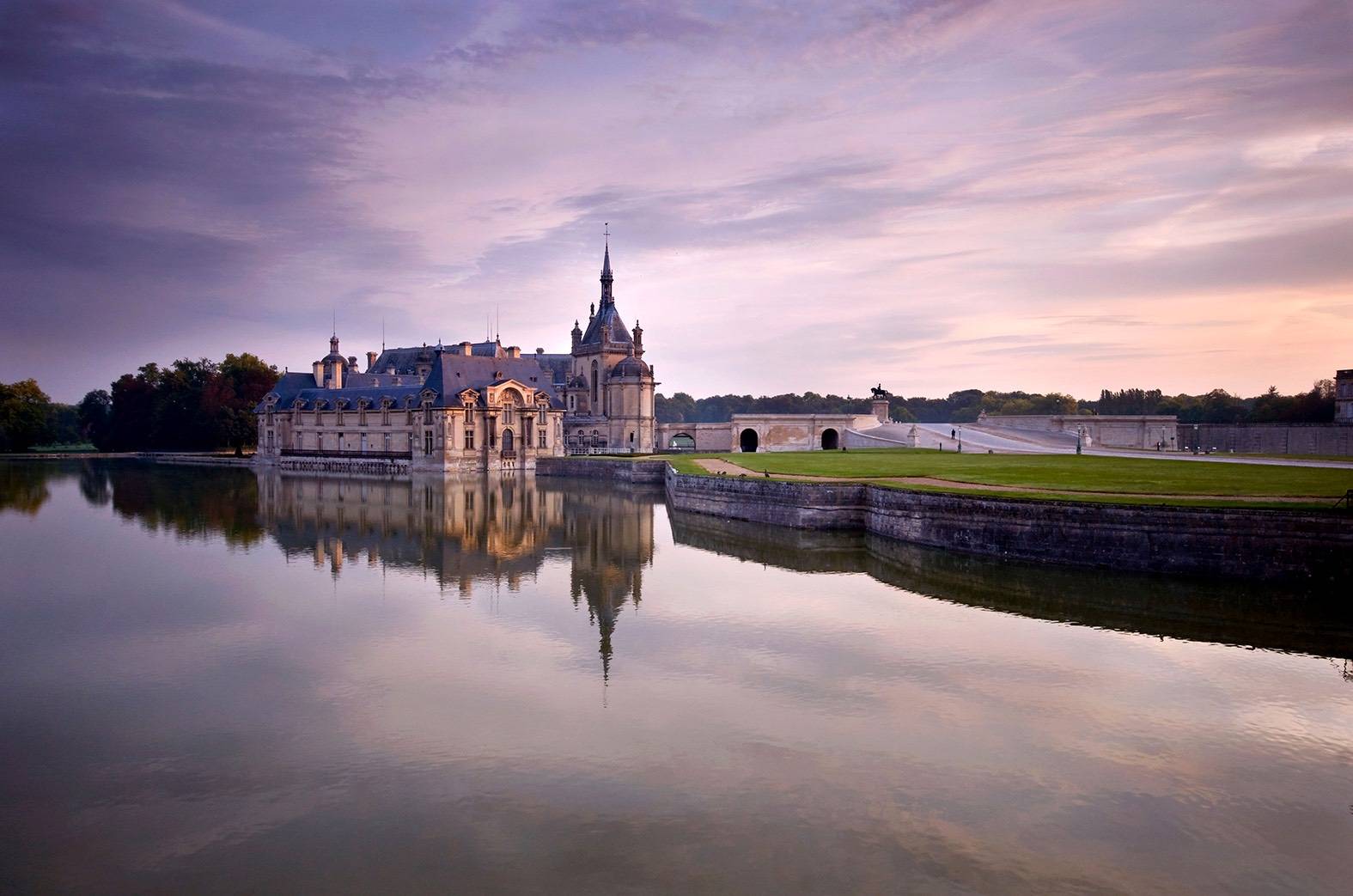 You only need see the amazed looks on the spectators’ faces at a horse race to connect with the fascination horses have always held for humans. A thoroughbred at full gallop can certainly captivate its audience. Onlookers will admire its sheer power, spirit, elegance and physique, and feel an affinity for this familiar yet wild being. Speaking of the races, horse lovers, equestrian professionals and the betting world know and love them, but so do artists. Some of the greatest modern painters have expertly captured this world on canvas, as witnessed by this landmark exhibition Painting the Races. .

Horse racing was born in 18th-century Britain, and became very popular; the exhibition follows its progression through to late 19th-century France. We see three major artists emerge: George Stubbs, Théodore Géricault and Edgar Degas. Across some 80 works, including paintings, drawings, sculptures, photographs and films, the exhibition explores the way the horse as subject is seen to represent modernity. Our journey begins with a major painter who is not well known in France: George Stubbs (1724-1806), and introduces a genre which is particularly British: Sporting Art. “Stubbs turned the theme of open-air recreation in general, and horse racing in particular, into a fine and respectable subject for painting”, (NDRL : visuel 1) explains Aurore Bayle-Loudet, who is Head of Collections at the Musée du Cheval at Domaine de Chantilly. She worked with this exhibition’s curators, honorary President and Director of the Musée du Louvre Henri Loyrette, and writer Christophe Donner. 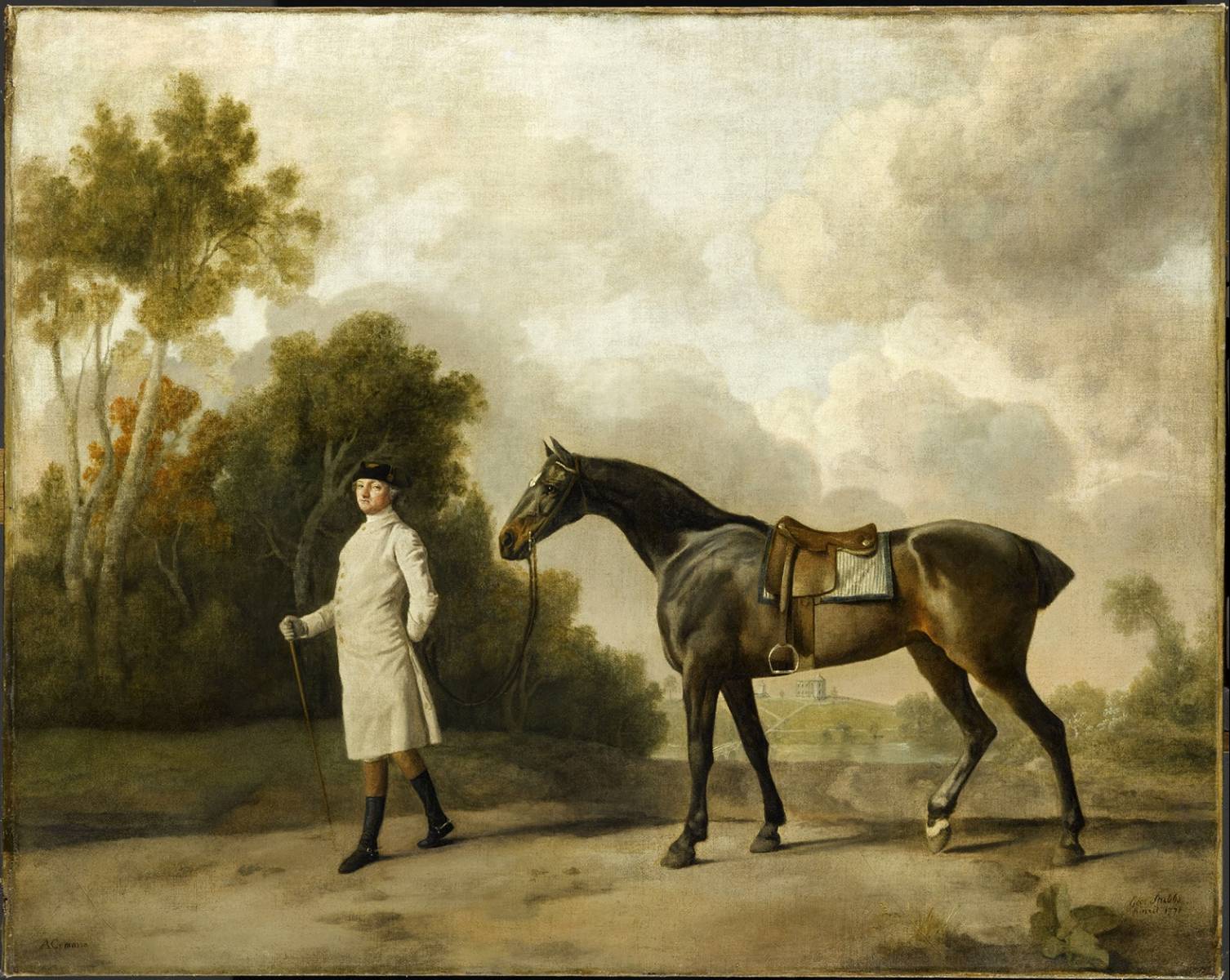 Stubbs is certainly key: he produced a series of anatomical sketches comprising 24 different views of horses, which demonstrate his new and unique point of view on the animal. His paintings show both horses at halt with their owners or jockeys and horses alone, in celebrations of their speed or race wins. Many painters followed his lead and turned their attention to horse racing scenes.

“We began with the idea that horse racing became emblematic of modern painting from the end of the 18th century.” 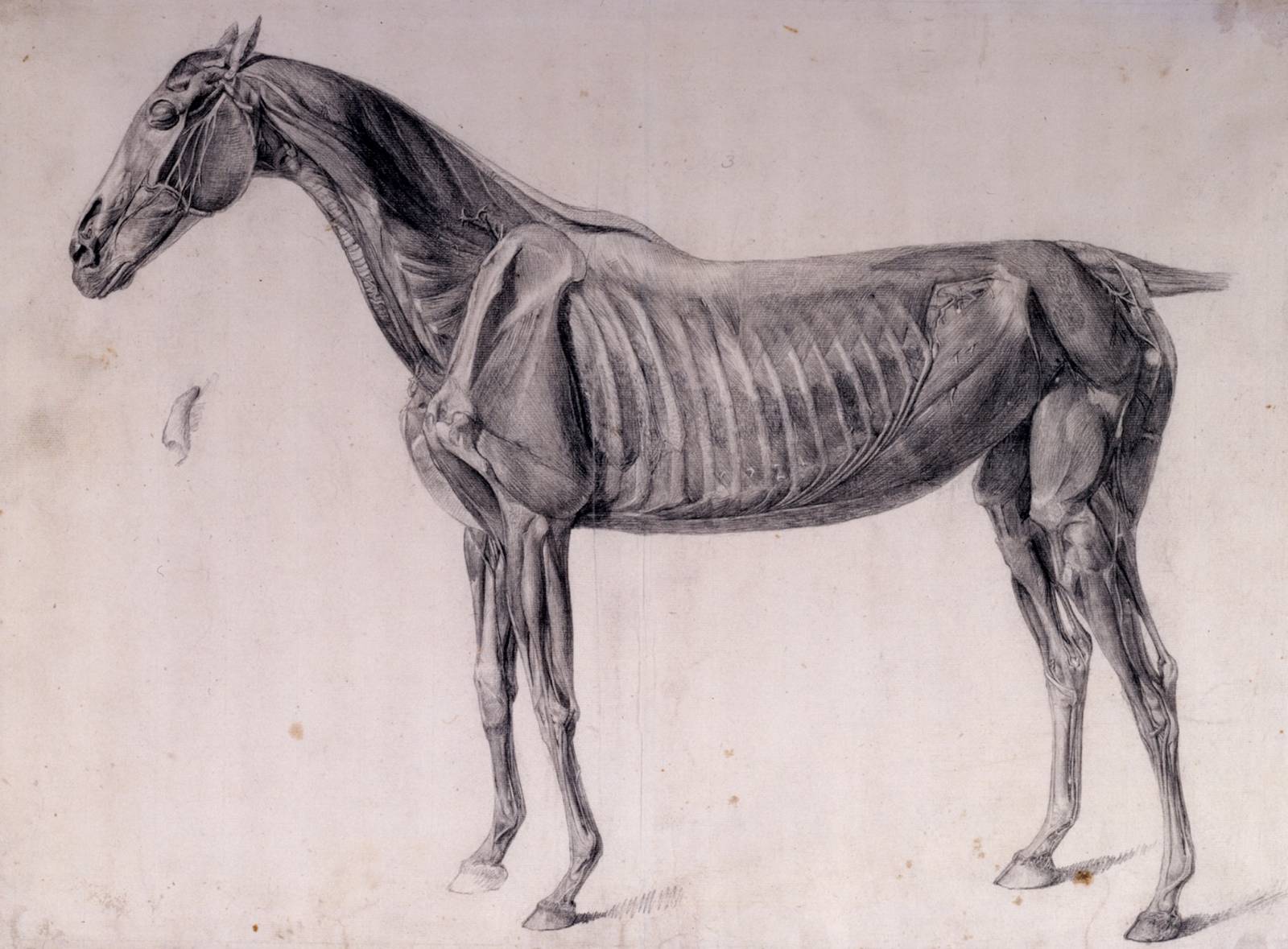 Under Louis XV, horse racing began to cross the channel. Some members of the French nobility promoted the sport, being both anglophiles and skilled riders. The speed and prestige associated with horses posed a challenge, and the brand-new hippodromes formed a surge in the popularity of such speed. Having learned from Britain in the 19th century, the first modern horse races began to emerge in France. Against this backdrop, Chantilly developed into a strong rival for the British races in the 1830s. In terms of painting, Théodore Géricault (1791-1824) was the front runner in transporting influences between Britain and France. He trained in London during the 1820s and, although not a rider himself, brought back a taste for horse racing and equestrian pursuits, as well as for landscape art. This tradition was unknown in France at the time. It is magnificently illustrated in Géricault’s Epsom Derby, the cornerstone of this exhibition – on exceptional loan from the Musée du Louvre. In it, the painter transposes a horse racing scene from an ancient into a modern context. “Géricault treats the subject in a romantic vein, with very stormy skies and horses that seem to fly”, says Aurore Bayle-Loudet. Flying horses? That's how this transient motion appears. The racehorses are captured in a ‘flying gallop’, with both fore and hind limbs extended horizontally, appearing to levitate. In reality, it is physically impossible for horses to gallop like that. Yet the portrayal allows the artist to depict the feeling of rapid movement, captured instantaneously, in what is actually a synthesis between two separate points in the horse’s gallop. 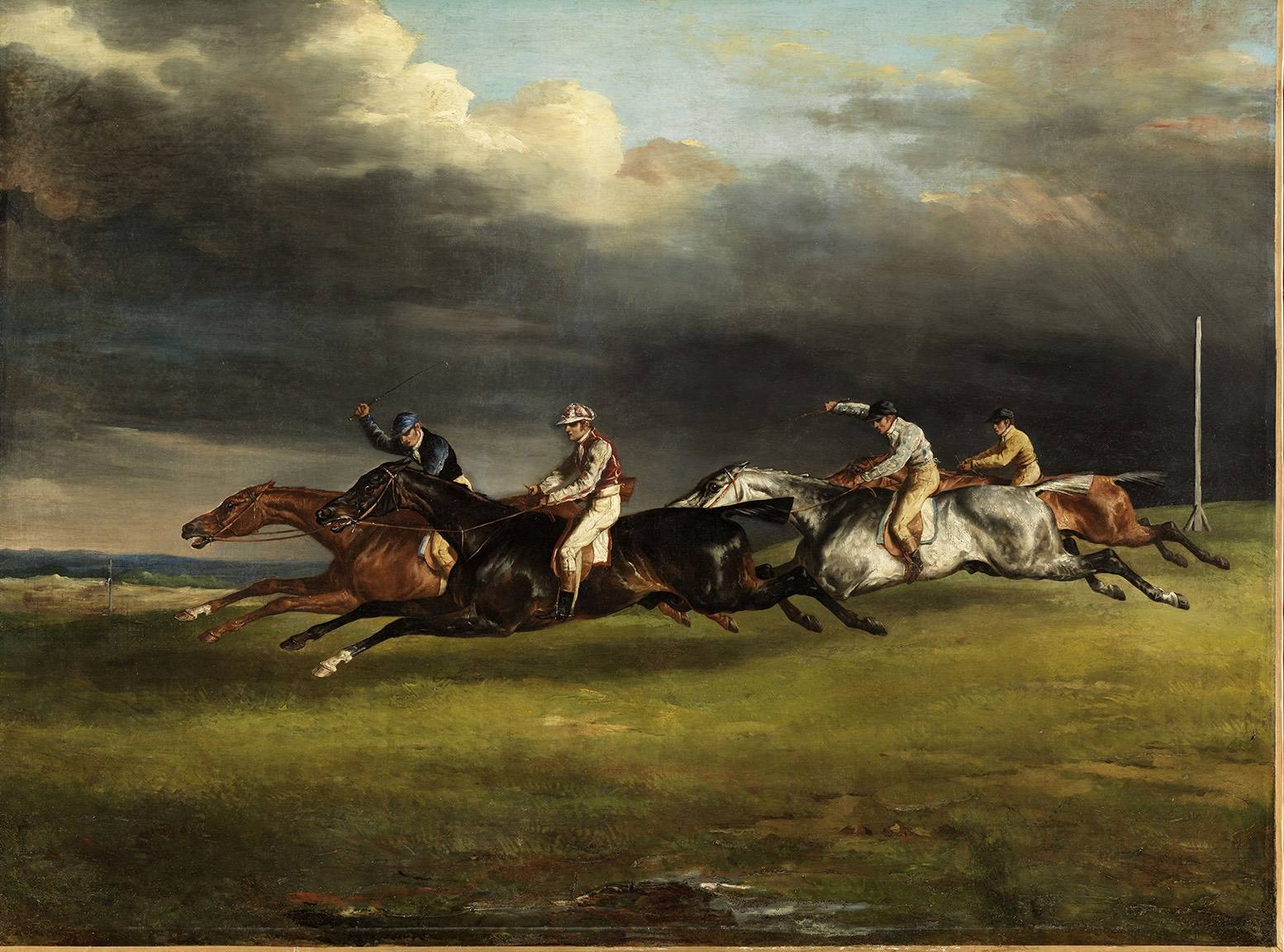 In France in the latter half of 19th century, horse racing rapidly became de rigueur. As such, it was naturally also a favourite subject for artists. Among them was Edgar Degas (1834-1917), who paid careful attention to the world around him and was enthused about this subject matter, which he used in many drawings, sculptures and paintings. In contrast to many artists fascinated by the speed and complexity of the gallop, whose work was a deconstructed vision of it, Degas was among those to move away from the scientific image and back towards the ‘flying gallop’ as artistic convention and image of full-speed equestrian motion. This provides a classic illustration of the relationship between art and reality, and the means of capturing the latter. You can discover and savour that relationship in this must-see exhibition until 4 October. 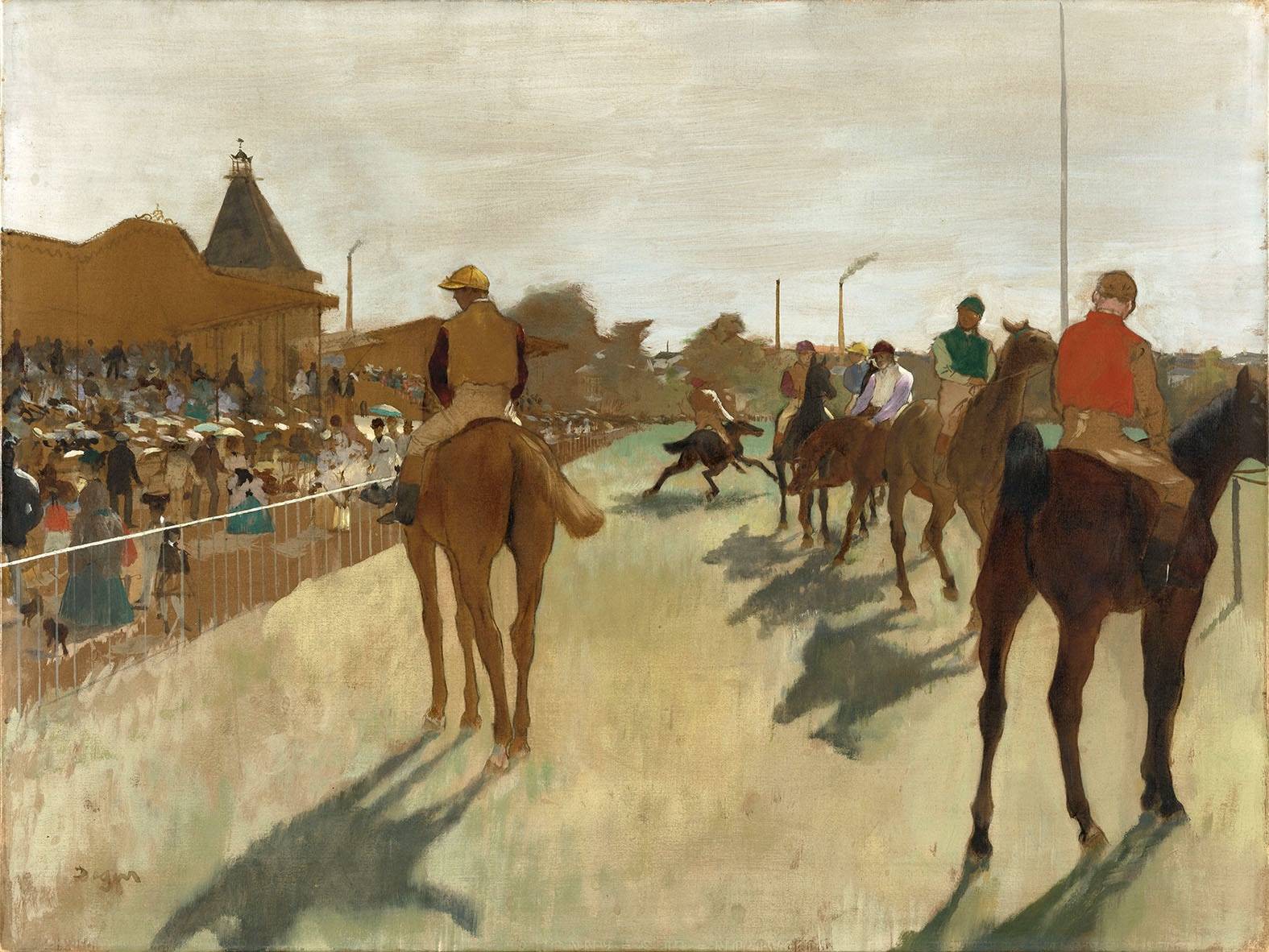 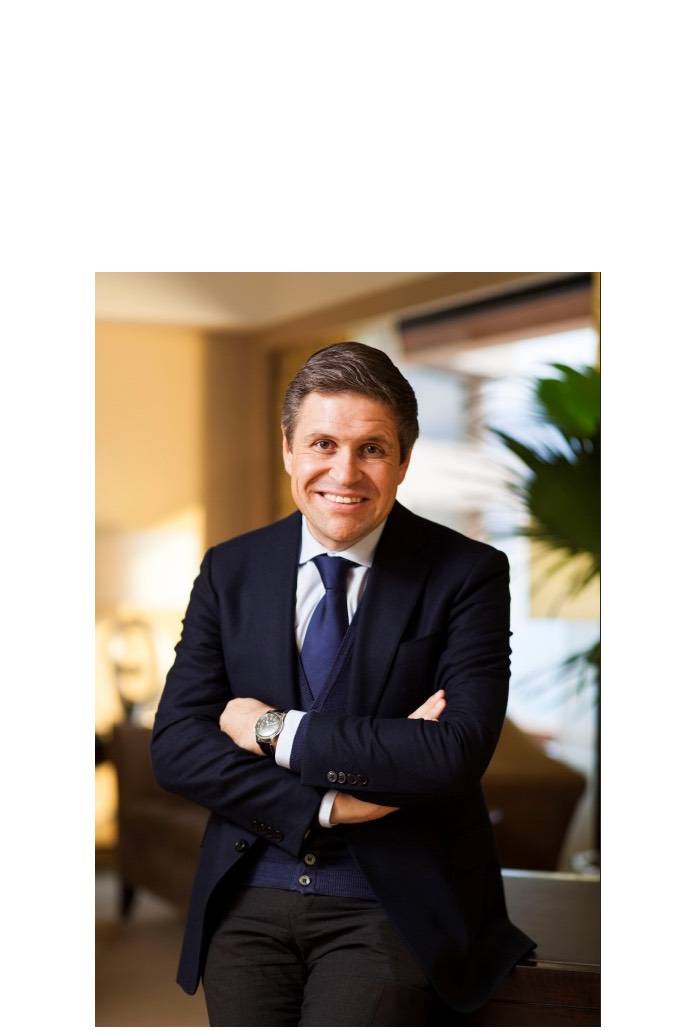 Longines’ love of equestrian sports dates back over a century How does this fine exhibition highlight the values lodged deep in Longines’ DNA?

It’s an exhibition that's perfectly in step with our values of elegance, tradition and performance.

Longines takes tradition as a starting point from which to build its future, as a firm foundation on which to innovate. The artists on display here do the same: Degas – who emerged around the same time as Longines – created some of his most beautiful paintings when he took up the mantle of his predecessors Stubbs and Géricault.

Then there’s the majestic Domaine de Chantilly where the exhibition will be held, and the flat racing courses which have pride of place there: both reflect the elegance intrinsic to our brand.

Performance relates to the artist and watchmaker, as well as the horse and jockey.

Illustration credits for Painting the Races