At 37, Nicolas Caullery can take pride in his rise to success: now head of a stable of 60 horses in Chantilly, he started barely 5 years ago with one horse, belonging to one owner who believed in him. Interview.

At 37, Nicolas Caullery can take pride in his rise to success: now head of a stable of 60 horses in Chantilly, he started barely 5 years ago with one horse, belonging to one owner who believed in him. Interview. 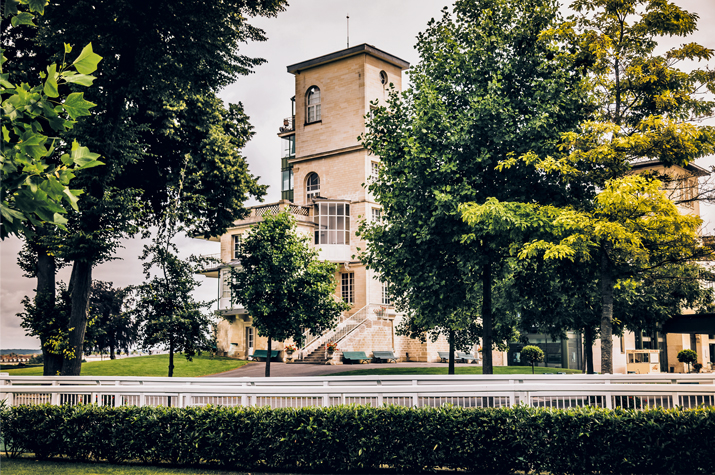 The Great Stables of Chantilly, a race day in the middle of July, a joyous echo is heard – the sound of horses’ hooves, conversations between trainers and owners, and the commentary of all those familiar with these meets. An architectural jewel of the 18th century, the stables are the largest in Europe, providing a backdrop from another era, full of history, emotion, and, undeniably, wild and unbridled hopes as well. One feels there the reigning elegance so typical of the equestrian world: the elegance of the place, of the people, of the horses. A sort of modus vivendi as old as time, yet not antiquated in any way. Nicolas Caullery welcomes us warmly with a smile, his gaze focused. As we plunge into this microcosm with its tried and tested methods, a glimpse into the world of race tracks becomes something completely fascinating as the young trainer shares with us how it works. 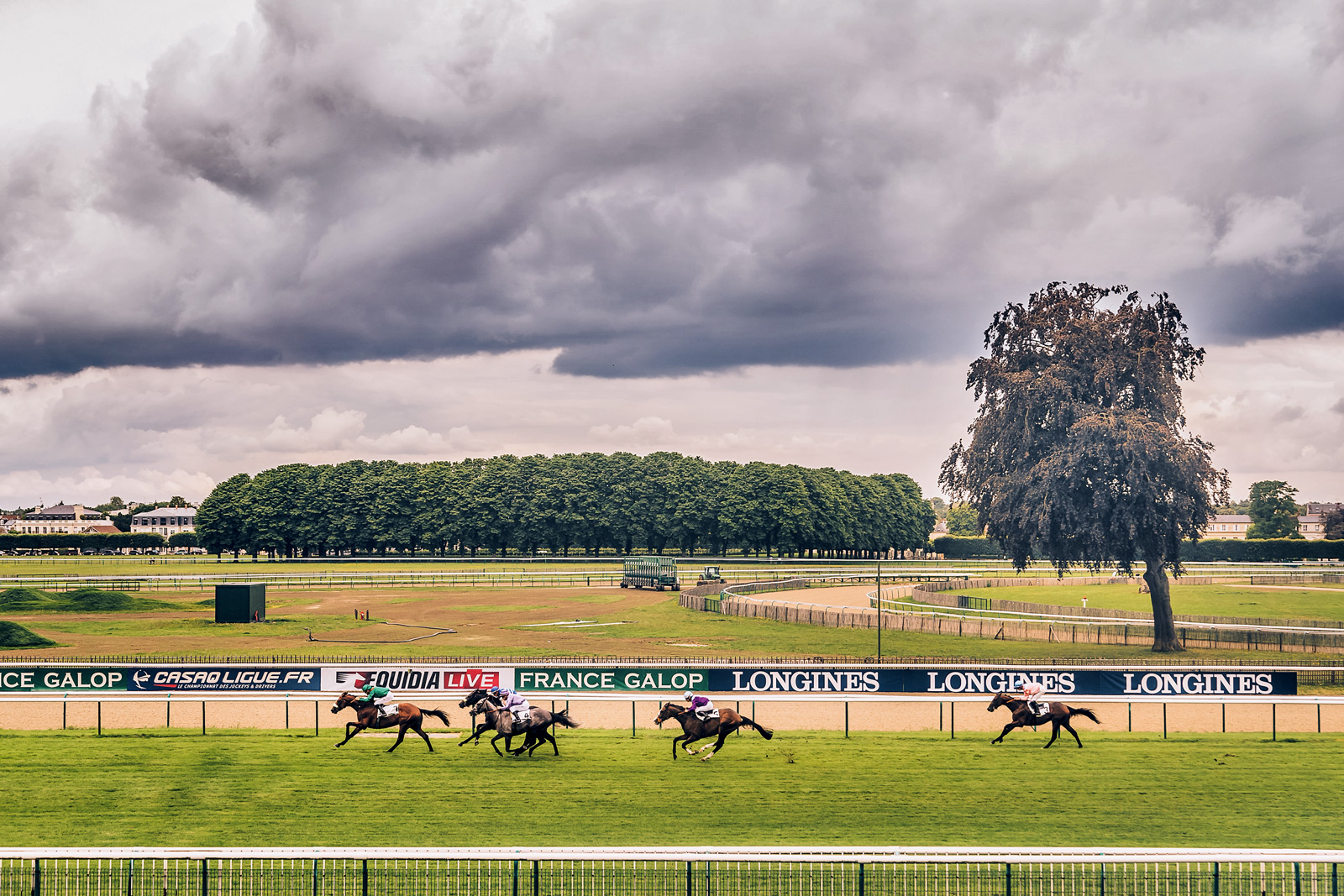 I developed my method from riding, looking at the horses, and going to races.

Originally from Northern France, Nicolas Caullery came to Chantilly at the age of 14. His father, a horse lover, took him to race tracks every weekend when he was young. “He had a hotel-restaurant with a PMU [French horse betting provider] sales point. My brothers and sisters and I have always been immersed in this world.” Nicolas was the only one to really get hooked on it, however. At the age of 10, he started riding racehorses. At 14, he began at the jockey apprentice school. “I had dreamed of being a jockey from a very young age, but nature decided otherwise,” he explained. And in fact, from the beginning of his adolescence, nature had plans for him to be a tall young man. “Actually, I was too heavy. So I redirected my attention to other activities. I worked in various race track stables where I had various responsibilities, and then I went to see how things were done abroad, in particular in Japan and the United States.” Having earned his Trainer License in 2009, in 2011 he decided to settle down somewhere. 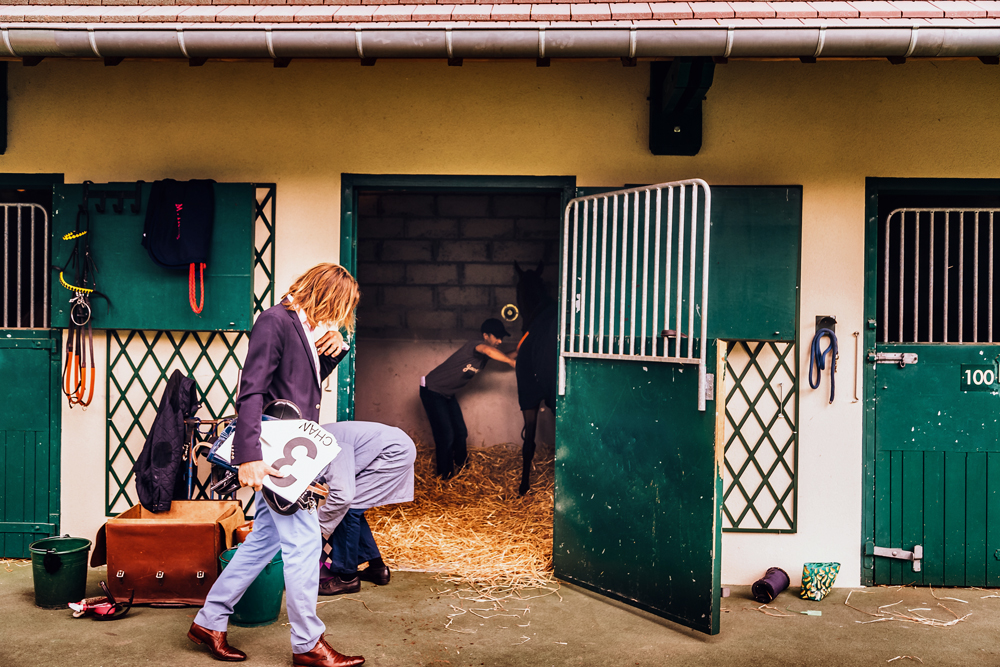 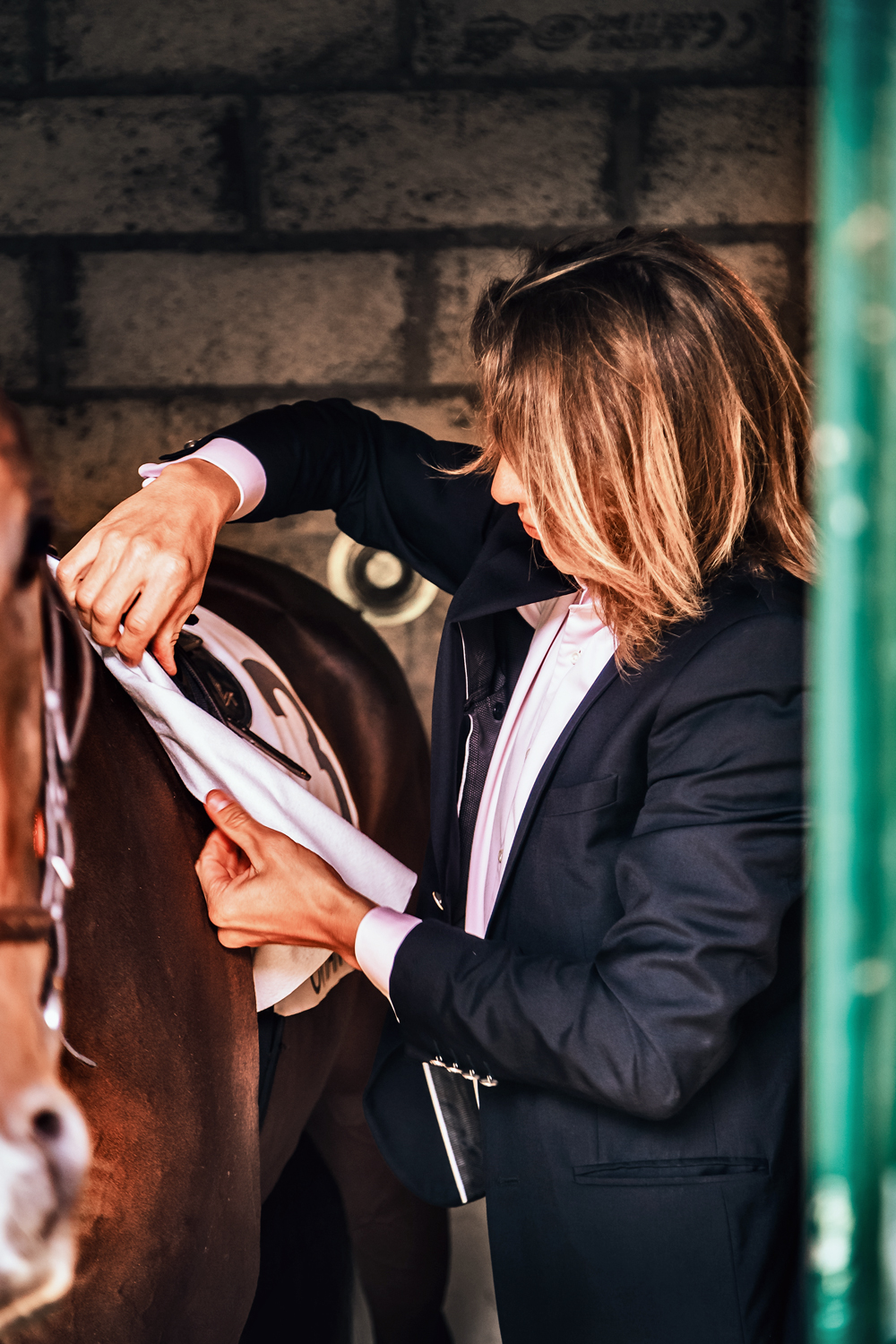 He chose Chantilly. You could say that with 23 years of passion for horses and at 37 years of age, he has already come a long way... How many horses did he start with, just 5 years ago? “One,” he responds simply. “He belonged to an owner who supported me before I established myself, telling me he was going to help me. He kept his promise. We won one race, then bought a second horse. Then a second owner joined me, and I bought one horse myself....” And that’s how a beautiful story like this gets off to a running start, from scratch.

Today, with sixty horses and forty-some owners, Nicolas Caullery’s stable sees impressive results. Because when it comes to racing, success is only judged by one thing: results. “That’s all that counts,” confirms the young trainer, to whom the well-being of the horses is essential. “In a stable like this one, there is a high turnover rate,” he explains. And in fact, not all horses are made to be racing champions. Some are reformed or unfortunately get injured, leave on vacation or retire, whereas others are sold, and other new ones join the stable... “We make sure that they are all taken care of. It’s hard to be a racehorse; they didn’t ask for this. Here, those that leave are all placed somewhere in return for good care.” 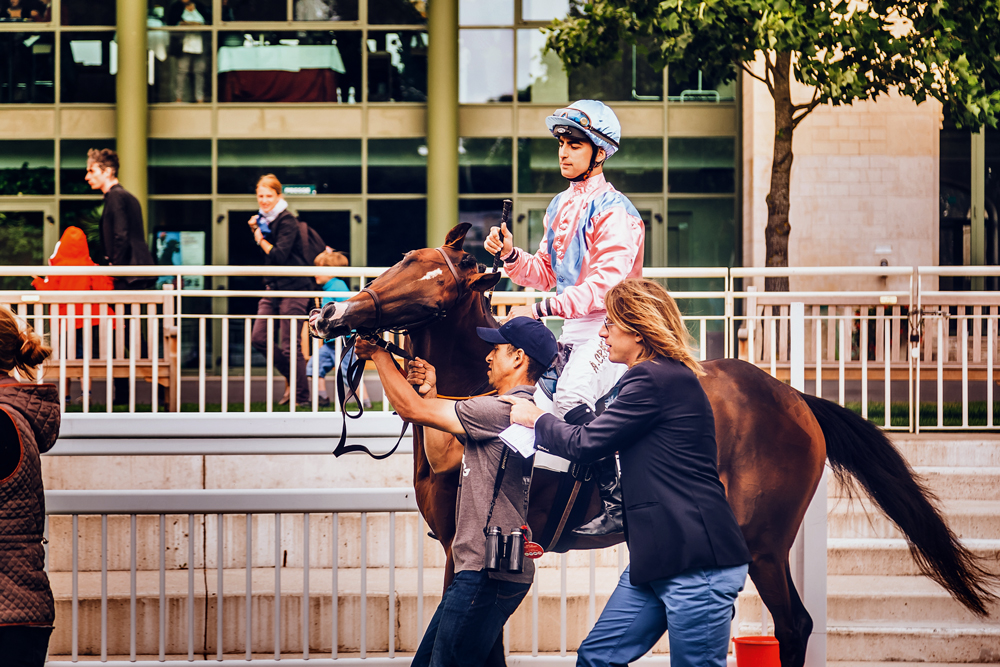 “The jockey and I, we speak the same language”

A quick rise to the top

But what are the keys to this kind of success? “We certainly had a bit of luck. That, too, is part of horse racing,” he acknowledges. “But also, we were there at the right time, it went well, we bought the right horses, participated in the right races, and got results.” Now, his is a name the big shots of the horse racing world trust, and he goes above and beyond to meet their expectations. 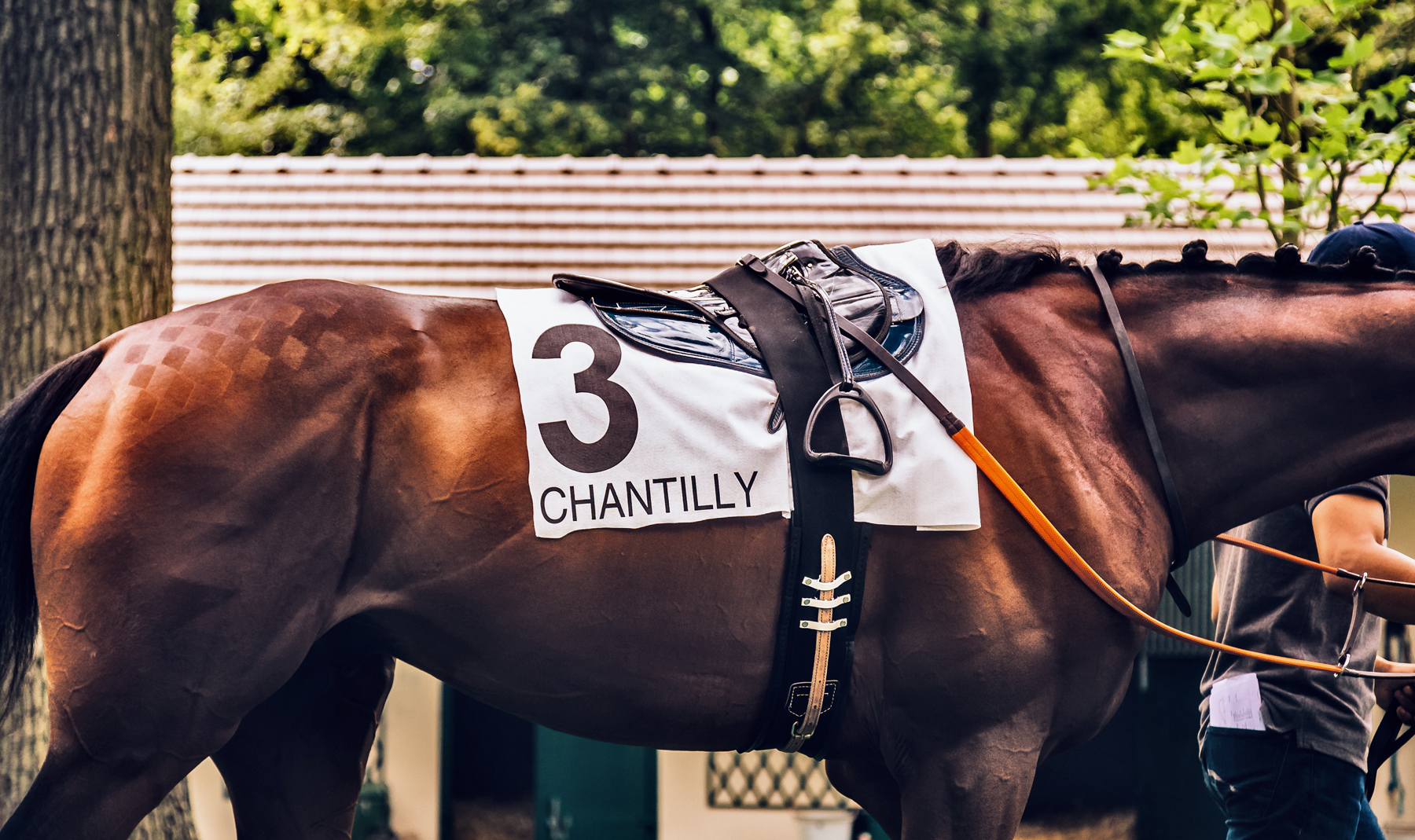 As a trainer, how do you teach your horses? “You know them through the feeling of the riders who mount them, the way we work with them according to defined objectives, and also through seeing them every day, weighing them, knowing their weight and contours, and the way they move and behave.” And in his opinion, what makes a “good” trainer? “Above all, you have to be a good manager,” he responds without hesitating. Because a racing stable is a business. “Then, it’s a question of vision.” “It’s not enough to work a horse and put a jockey on it. You need feeling, intuition. It’s hard to explain because all the working methods are good, and each trainer has his own.” Then, of course, the horses also have to be fed well, they have to be looked after and given proper care, with a competent veterinarian and blacksmith. “It’s a whole ensemble of things,” he confirms, “but the foundation is the intrinsic quality of the horse.” 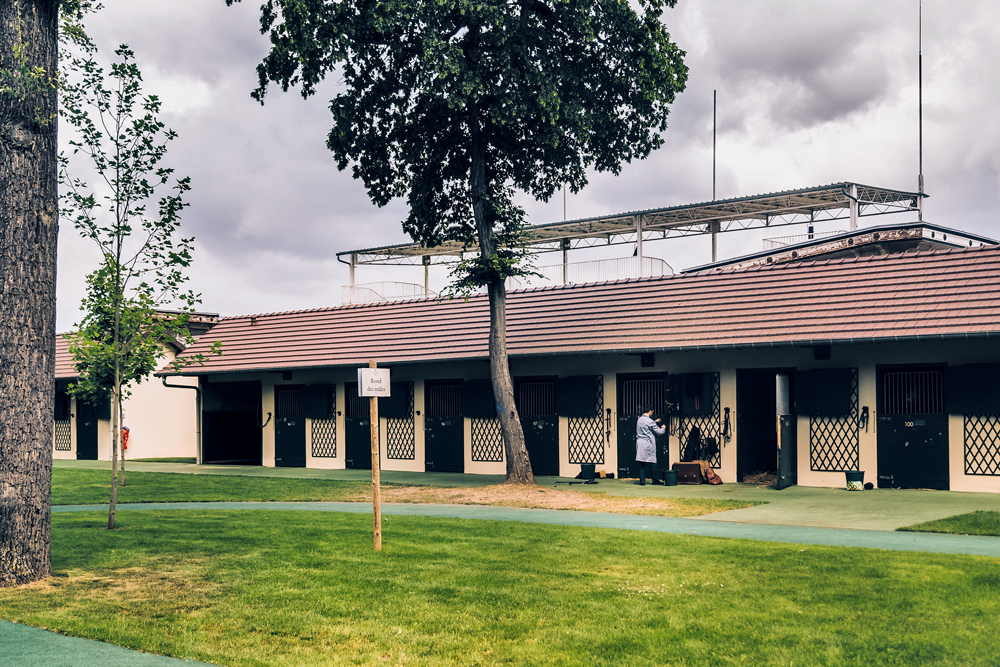 Also a trainer – for longer than he has been – Marine Henry, Nicolas Caullery’s partner, has ten horses. “That makes seventy horses at the stable. We work together, but under our respective names.” Marine Henry will join us later, as she also has a horse racing today. Charles, their charming little boy, skips about around her and comes to jump into his father’s arms. “He’s already crazy about horses,” Nicolas Caullery says, pleased.

“Here I’m doing the first with Don Papa, a horse I’ve been training for a short time. For this meet, there are five participants. It’s a chance to see how he behaves,” he comments, going to find the saddle. “The jockey will go weigh himself at the programmed weight, with the saddle, his silks, his pants, and his boots, the weight officially recorded by the scale,” he continues. The trainer will then take the saddle, to put it on the horse himself. 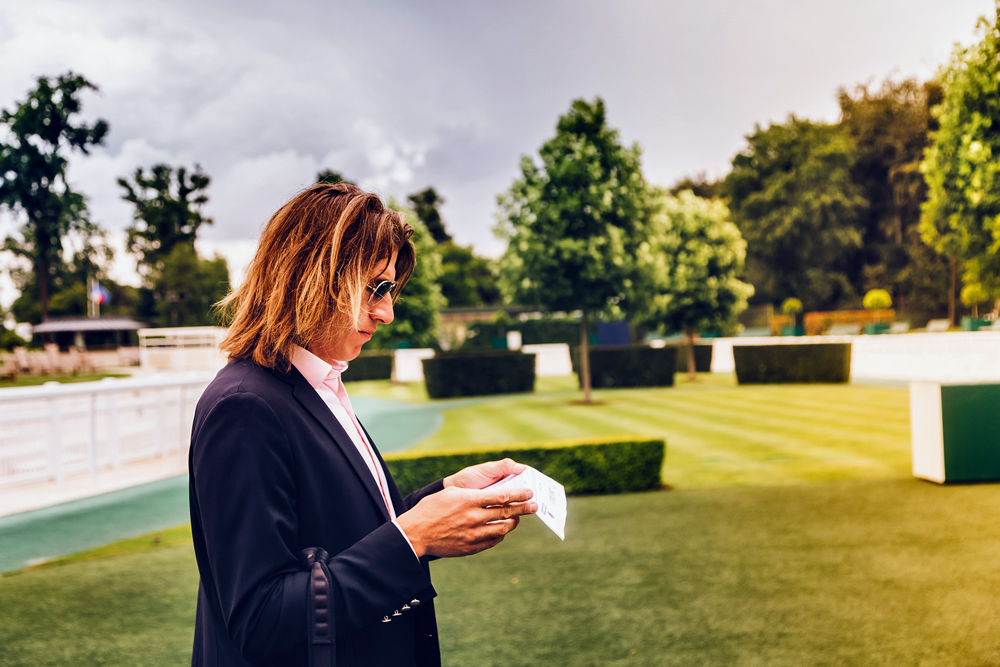 “I always work with the future in mind”

Afterward, he finds the jockey at the Parade Ring to give his final instructions on the racing tactics to be used. After that, Nicolas Caullery goes to saddle Don Papa and, in a final “personal” touch, brushes his croup into a checkerboard pattern. “Don Papa is a horse that I especially want to test on the 3,000-meter race,” he says. On the loudspeaker, we hear a woman’s voice echoing throughout the horse track: “The jockeys are mounting their horses for the first race.” A double bell is heard, and another voice says: “Gentlemen in the saddle, please.” Nicolas Caullery approaches Don Papa, wearing the number 3, to give Anthony Crastus his recommendations. Crastus listens to him attentively, nodding his head and giving a short response. One can sense the close cooperation between the trainer and the jockey, as with his horse and the horse’s owners, who have come to watch the race.
“The horses are at the start of the first race,” the woman’s voice announces on the loud speaker. Everyone grabs their binoculars. And it starts. The horses take two laps around the track in a canter to warm up. Then they’re off. The commentator describes each pace and position from close up. Don Papa does well; his trainer is satisfied. Needless to say, it all happens very quickly. When we see the horses again with their riders, it’s impressive to see how the horses gave it their all. They’re out of breath, like dogs that have run very hard, and their veins are protruding on their sides. 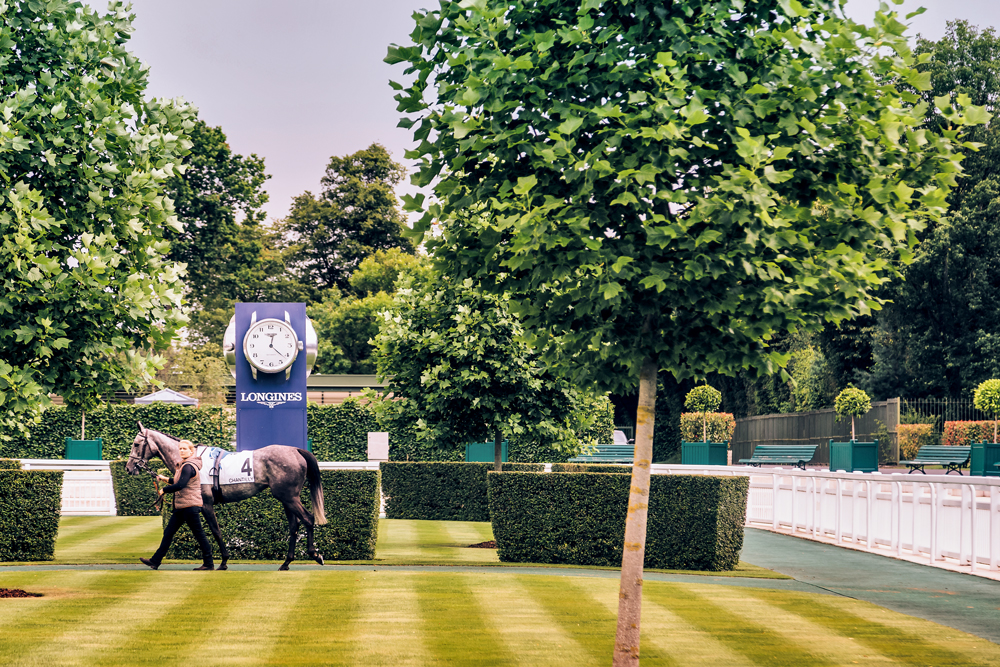 In front of each stable, Pre-Parade Rings are set up. This is where the horses are taken to walk about one hour before the race. “Don Papa went out this morning, now he’s walked one hour, and after the race he will walk in the same place for a solid quarter of an hour, the cool-down period.” Once the horse has cooled down and gotten its breath back, it will be given water and returned to the box stall, where it will be left to relax. At the end, when it’s all over (there is still a weigh-in after the race, as well as a check-up by the veterinarian), everyone is taken back home. “So we replay the game, as you would say with sports. We could have won if... We should have done that...,” smiles the young trainer, collecting the results. “And on France Galop, we can see all the races of our boarders, allowing us to conduct a calm analysis,” he says. 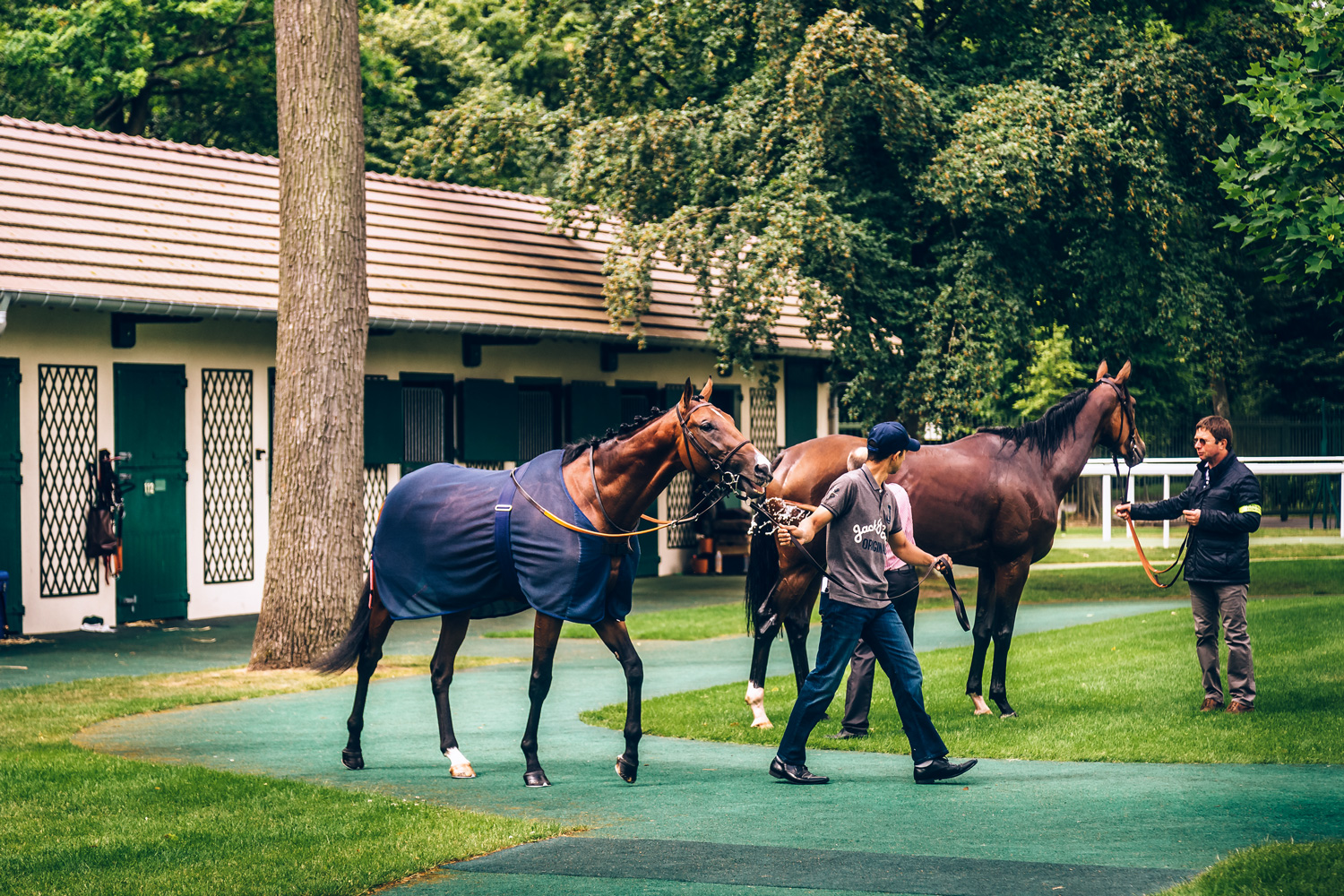 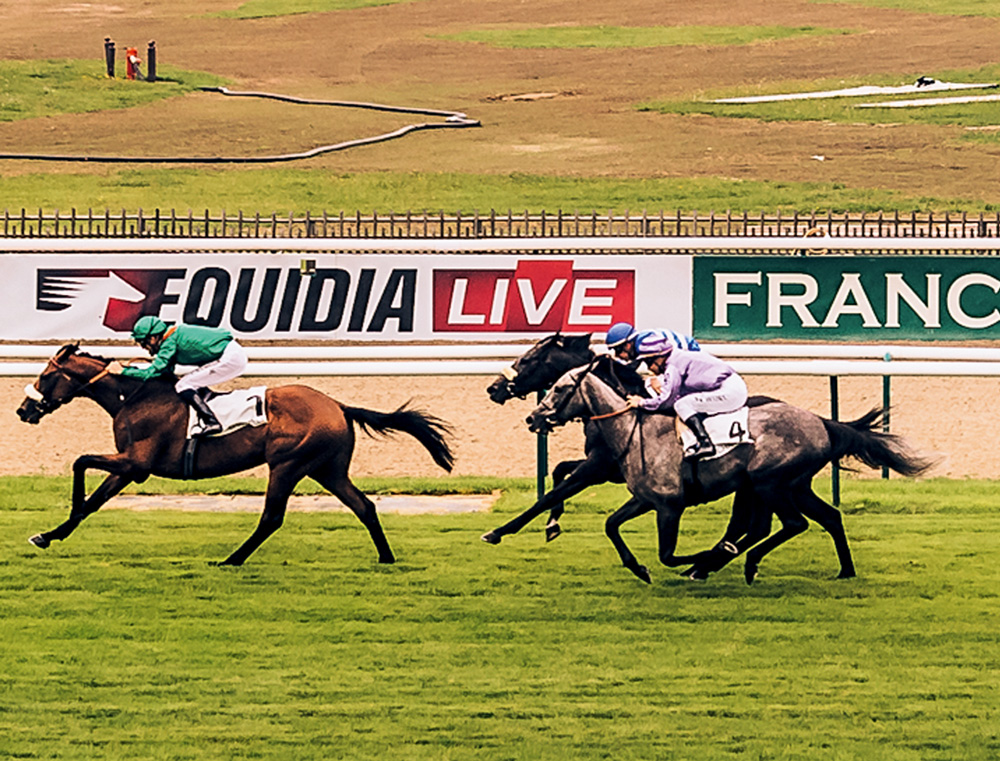 “The majority of my owners are friends,” Nicolas Caullery tells us, “and for most of them, the horse races are a leisure activity, as other people would have a boat, for example.” And concretely, how does this happen? “Depending on the race conditions and the distance, I decide to take this or that horse.” And the jockey? He’s also the one who chooses them. “I work with Anthony Crastus a lot, who works the horses in the morning at the house and who knows our stables well,” he informed us. The horses receive training every day. “These are athletes that I am trying to bring to the highest level, to make them competitive in the races in which I enter them.” It’s therefore up to the trainer to decide whether they run the 2,000-, 3,000-, or 1,600-meter race, on grass or dirt, on a left-handed or right-handed course – many parameters that can be decisive depending on how the horses work and recover. “They don’t talk, so you have to feel them!” concludes Nicolas Caullery. In his eyes I can see a sparkle from the love and respect he has for those he trains to give it their all.