H
vanessavon zitZEwitz Artiste
Vanessa von Zitzewitz came onto the scene at a young age, and has already made her mark on the world of photography. Whether it be in her photographs for major luxury brands, her celebrity portraits, her nudes, her animal shots, or her work to help support orphans in Bangkok, her truly artistic nature is unmistakable. An equestrian fan and author of a beautiful book on Al Shaqab’s purebred Arabian horses, she has given us the honor and pleasure of responding to a few questions. 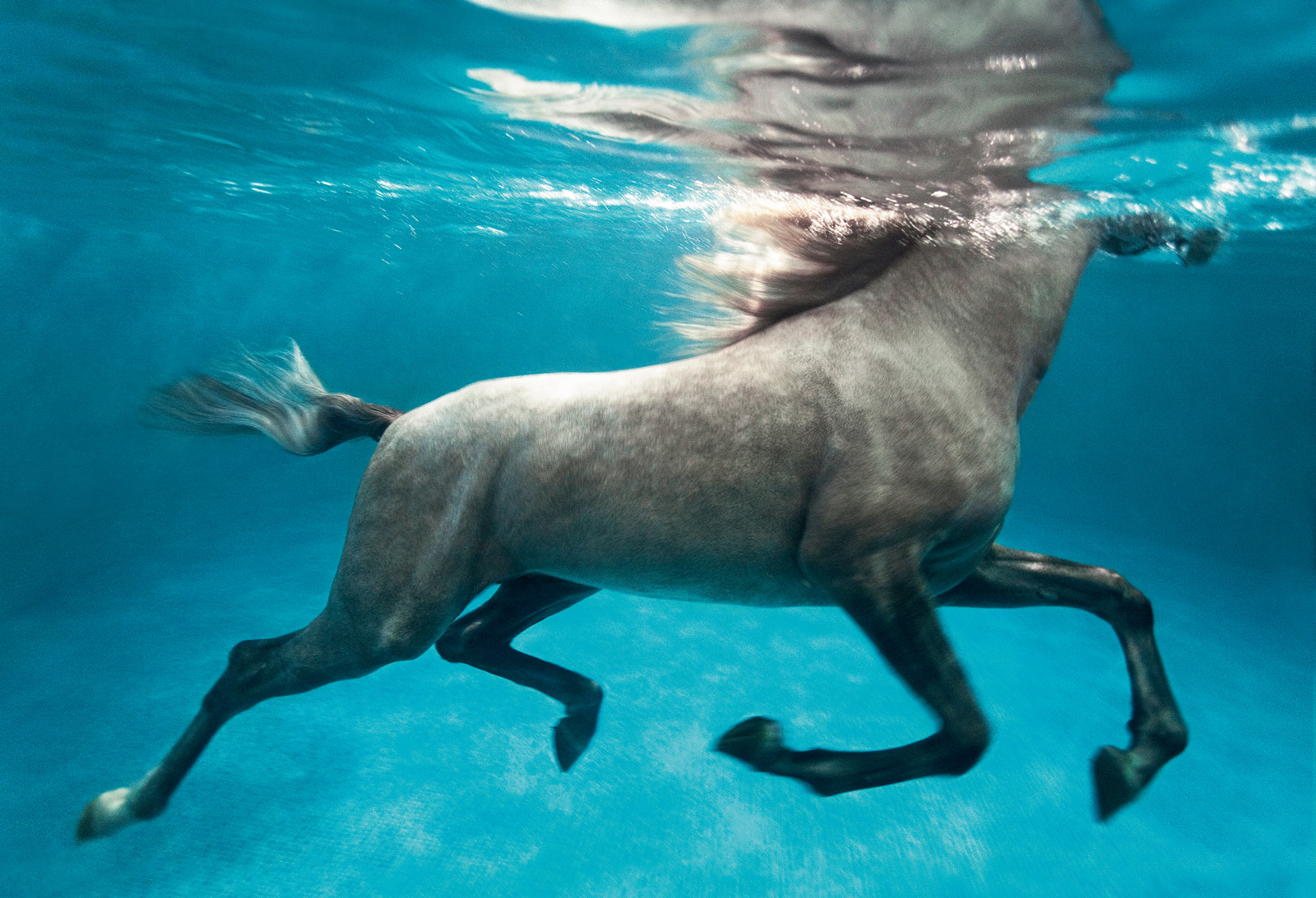 You have an impressive photography career: You had your first exhibition when you were 21, you are the first woman to have been named International Canon Ambassador, and you have done portraits of several celebrities. How did you find your calling? What do you hope to achieve through it?

Thank you!
When I saw Richard Avedon’s photograph “Dovima with the Elephants,” which was still evolving, it seemed clear to me... The magic created by this shot taken under the canopy of the Cirque d’Hiver, the elegance of the Dior woman, the grace of the movement, the delicate proximity with this extraordinary power, captured by Avedon, a master. This vision was a revelation for me: I will be a photographer.
I fought very early to win large campaigns, and I knew how to use my contacts to get exceptional moments, absolutely private, as was the case with Gianni Agnelli, Luciano Pavarotti, Mick Jagger, His Majesty Juan Carlos, King of Spain.
My work as a portrait artist and my affinity for black and white, nudes, and depiction of the female body gave me the desire to refine my artistic eye and to offer, at this stage in my career, a portrait that was both universal and completely subjective: that of women, whom I enjoy portraying from different points of view.

...Competition is an emotional release, the culmination of long training and the synthesis of the bond that I have developed with my horses.

You are also a fan of horses and an excellent rider. Do you have a special, personal, or family link to the equestrian world? Why do you compete with your horse?

All these links at the same time! Horses were always present in my family environment; my ancestors must have passed on the instinct. I own several horses, and most recently a pony for my son, with whom I’m happy to be able to share this passion now.
Competition is an emotional release, the culmination of long training, and the synthesis of the bond that I have developed with my horses. I’ve put competition on hold for a few years now, but I miss the adrenaline more and more... Even though I still go to competitions whenever possible. To have a friendship with one of the best riders in the world, such as Edwina Alexander-Tops, and to receive encouragement from my son, who is without a doubt my biggest fan, is great motivation! 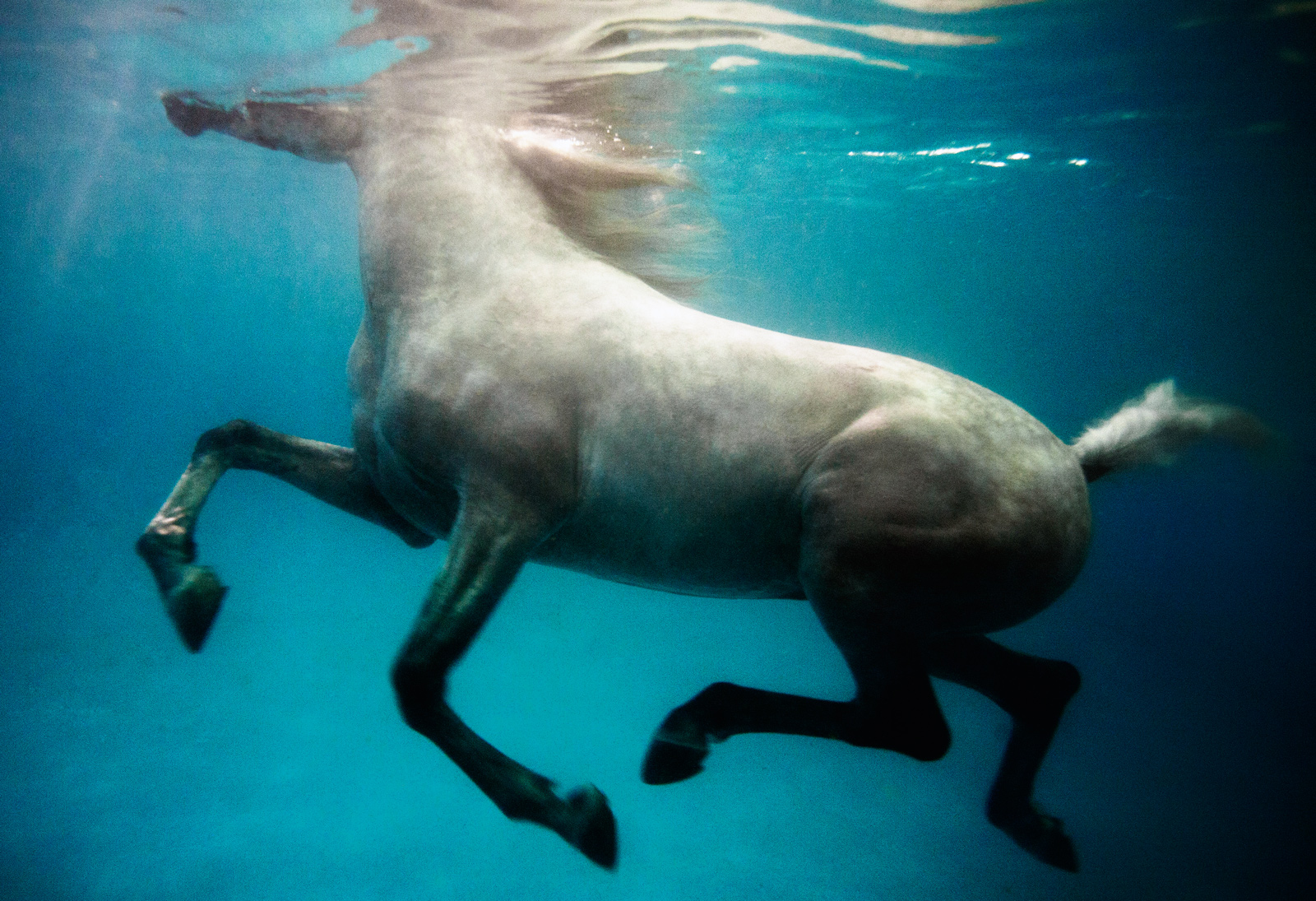 You are not indifferent to animal distress. You have even taken in several horses. Can you tell us their story?

Distress in general actually!
My empathy and altruism are also directed toward children... Who are as vulnerable as animals, in a world torn apart by disparity. It is important for me to be able to use my work to help them. Here I’m referring to my charity work with the Mercy Center in Bangkok. With the collaboration of Father Joe, who is in charge of the daily operations of the Human Development Foundation, and a jeweler, the auctioning of my photograph book “Slaughterhouse Angels,” of which all proceeds went to the Mercy Center, was able to raise $400,000 for children, patients [children living with HIV/AIDS], and orphans.
As for horses, my life has been marked by certain encounters. In particular, the trip to Italy during which I visited the historic site of Pompei comes to mind. As often happens, people offer to take you around in a luxurious horse-drawn carriage for tourists... But that day, the carriage was drawn by a horse in a rare half-starved state. I immediately spoke to its owner, who despite his good intentions didn’t have the means to take care of it... This horse was his only way of making a living. I immediately offered to buy it from him, and I had it transferred to the Paris region to receive the necessary care. “Napoli”, as I nicknamed him, survived. I was even able to find him a home where he could enjoy his days.

More recently, I was contacted by the Santa Maria refuge in Malaga, Spain, that had become familiar with me thanks to my book “Horses of Qatar: The Legend of Al Shaqab.” The crisis in Spain has had many victims among horses. Populations impacted by brutal economic decline have had to abandon many horses in the streets. In collaboration with Nieves Alvares (Spanish model and TV show host) and the popular Spanish magazine “Hola,” I proposed a campaign called the Santa Maria Project to raise funds for the refuge in Malaga. We raised more than €20,000.

How did the “Horses of Qatar” project, which took place in the stables on the stud farm of His Highness Sheikh Hamad Bin Khalifa Al Thani, Emir of Qatar, come about?

I was hired by His Highness Sheikh Hamad Bin Khalifa Al Thani, Emir of Qatar, to make portraits of members of the family. On the occasion, I had the chance to visit Al Shaqab’s stables. It was a huge privilege. There is a special atmosphere in that mythical place, peaceful and timeless. The Emir and his daughter H. E. Sheikha Al Mayassa did me the honor of entrusting to me the creation of a 300-page book of art dedicated to this ancestral place and its horses. For me, “Horses of Qatar” was a blessing, both because for the first time I could combine my passion for horses and my work, and because I was able to exhibit it at the Petit Palais Museum in Paris (2009). 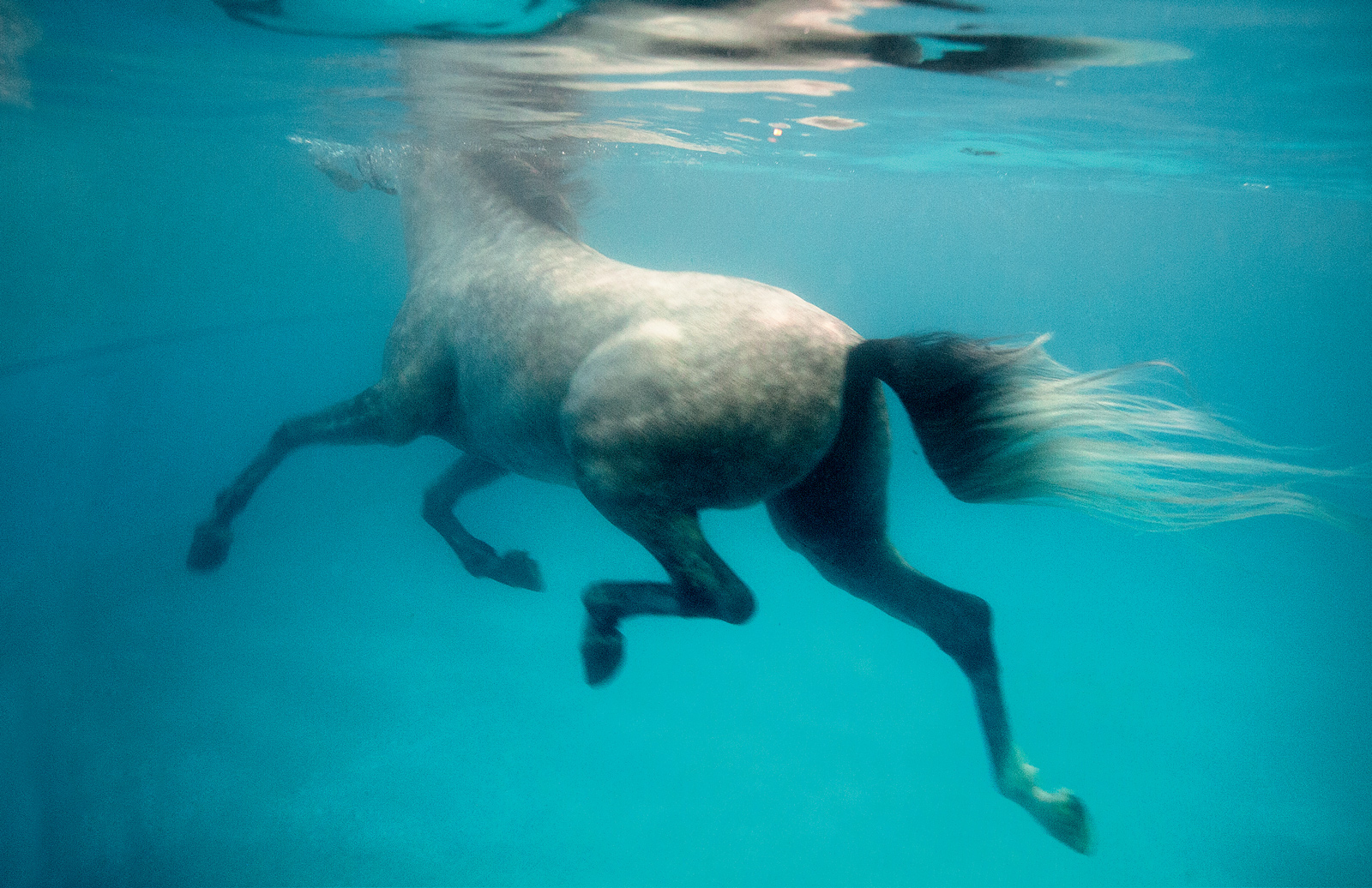 Can you describe the place to us and the impressions it left you with? And the horses?

Al Shaqab is the kingdom of the Arabian horse. The colors of the stables, the daily care given to the horses, the silence, which creates such a contrast with the city of Doha, give you a sense of serenity. It’s without a doubt because the place appears to be timeless. Al Shaqab inspires the same thing horses inspire: tranquility, freedom, wisdom, and tenderness.
While all horses have their own personality, it’s certainly Marwan Al Shaqab that left the biggest impression on me. This horse, the highest ranked stallion in the world, is on a whole different level! During the shoot, he offered me all of his charisma, his strength, his impetuousness, and his respect for his fellow man. He always had this regal attitude... As if he knew of his internationally recognized status!

Does working in such a place and with such animals require special working conditions? Do they allow themselves to be controlled easily?

Since I wanted to photograph them in their most natural and spontaneous states, these two years of production gave me truly extraordinary moments! For example, I only had the opportunity to photograph one birth. So I had to camp, in the true sense of the word, in the stables with the mare, in order to capture the delivery and the first breaths of the foal... But you forget the nights awake in the hay when you get to live out these types of shots!
As far as controlling them goes, more specifically it’s a question of instincts and patience. I know horses well, so I didn’t have any problem getting them to offer me all of their spirit... 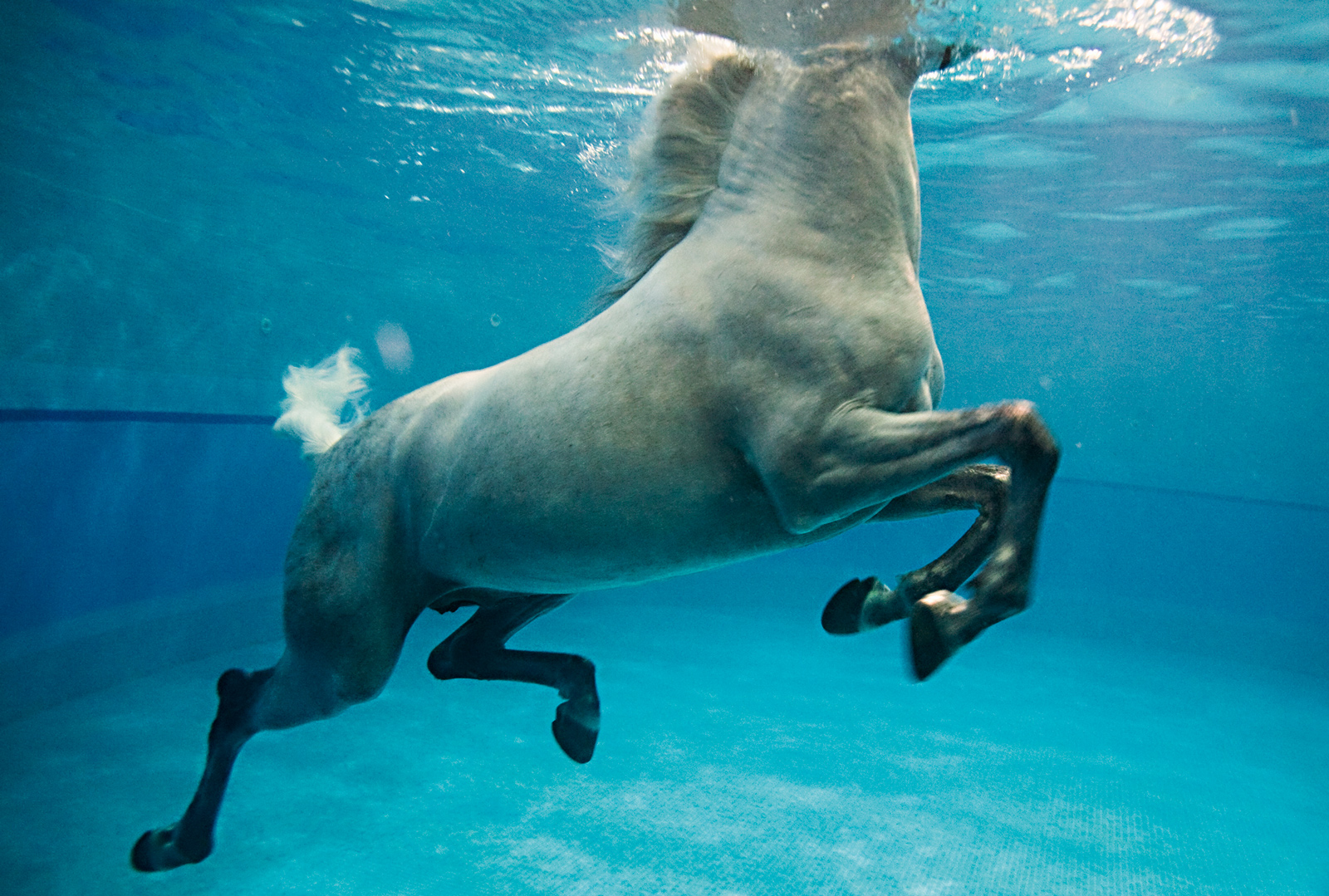 Where did the idea of taking underwater photographs of the horses in the pool come from? Were they especially hard to take?

When I learned that a portion of the horses’ show training took place in a special pool, I had the idea of shooting these sequences right away. Moreover, taking photographs outside of the pool seemed to have no interest to me. My idea to take underwater photographs definitely surprised the stablehands, and it required some special technical arrangements! Luckily, I can hold my breath for a long time... The hardest part was that I had to be fast. The horses don’t swim for long, and I had to be very careful about my safety. The camera lens I used gives a deformed view, and once the hoof of a swimmer came very close to my head... I was more frightened than hurt, with certainly an exceptional series as a result! “Underwater Horses” perfectly illustrates the magic that this animal has represented in the collective subconsciousness over centuries: from the myth of the unicorn to boundless freedom, mystery, strength, and grace in its purest form.

In several photos, whether in your nudes or your animal shots, we see bodies that are nearly motionless but twisting, as if suspended in time and space, and which show some movement just the same. These are images in contours and curves. Is this something you consciously seek? Can you tell us more about it?

That’s a tough question... The artist does not always explain that which comes from him.
My flagship subjects, women and animals, are innately linked to the idea that I have of Beauty... And I don’t see in straightness and rigidity a form of beauty... Also, these two subjects are undoubtedly an echo of the very idea I have of Life, of what is alive... Is life not a perpetual motion? So, I think these curves suspended in time are a reflection of my harmonious and absolute vision of Life... 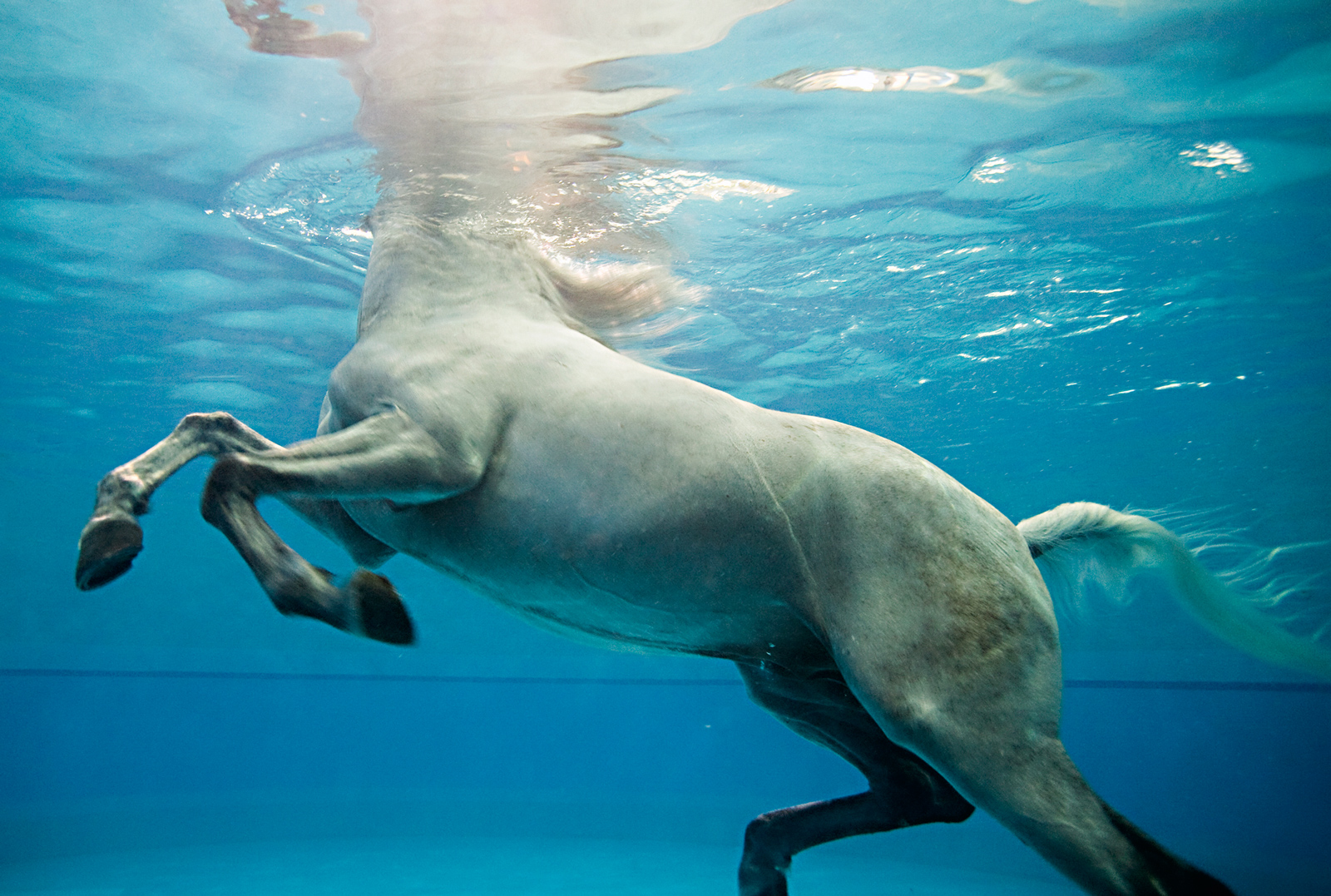 What photography projects do you dream of creating? And equestrian projects? What thing or things do you still want to do?

The subject of women is the subject that never ceases to inspire me... Probably because I can’t settle with establishing the portrait of women in just one depiction, from one point of view. I never get tired of refining this “universal” portrait using different decors, and I have many ideas for that! My production pace is also getting faster and faster... But I will never disclose anything before producing the shots! (laughs)
As for my goals with horses, I have started training again, and I’m happy to experience this now as a family. I haven’t set any dates yet, but I haven’t ruled out returning to competition in 2016!
As for telling you “what I still want to do,” it’s a wording that implies “the end”... And that is far from my state of mind! I feel that I’m still in the dawn of my artistic career, and that allows me to always be on the lookout for new ideas, new projects, and I don’t want to set any limits for myself on an inspiration that remains prolific!

You will soon, for the first time, exhibit your work in Belgium with the Young Gallery in Brussels. Can you tell us about it briefly?

It will be my first time exhibiting my work in Belgium, and I’m happy to have this exhibition project with the Young Gallery in Brussels. It’s a retrospective of my work, mixing portraits and nudes, some more classic and some new... If not unpublished! So one room will be entirely dedicated to my work “Horses of Qatar: The Legend of Al Shaqab,” where I will have the pleasure of presenting this fabulous photographic adventure again.
Since my exhibition in Munich, at the Bernheimer Gallery, I have produced new shots, which I will be happy to exhibit soon... 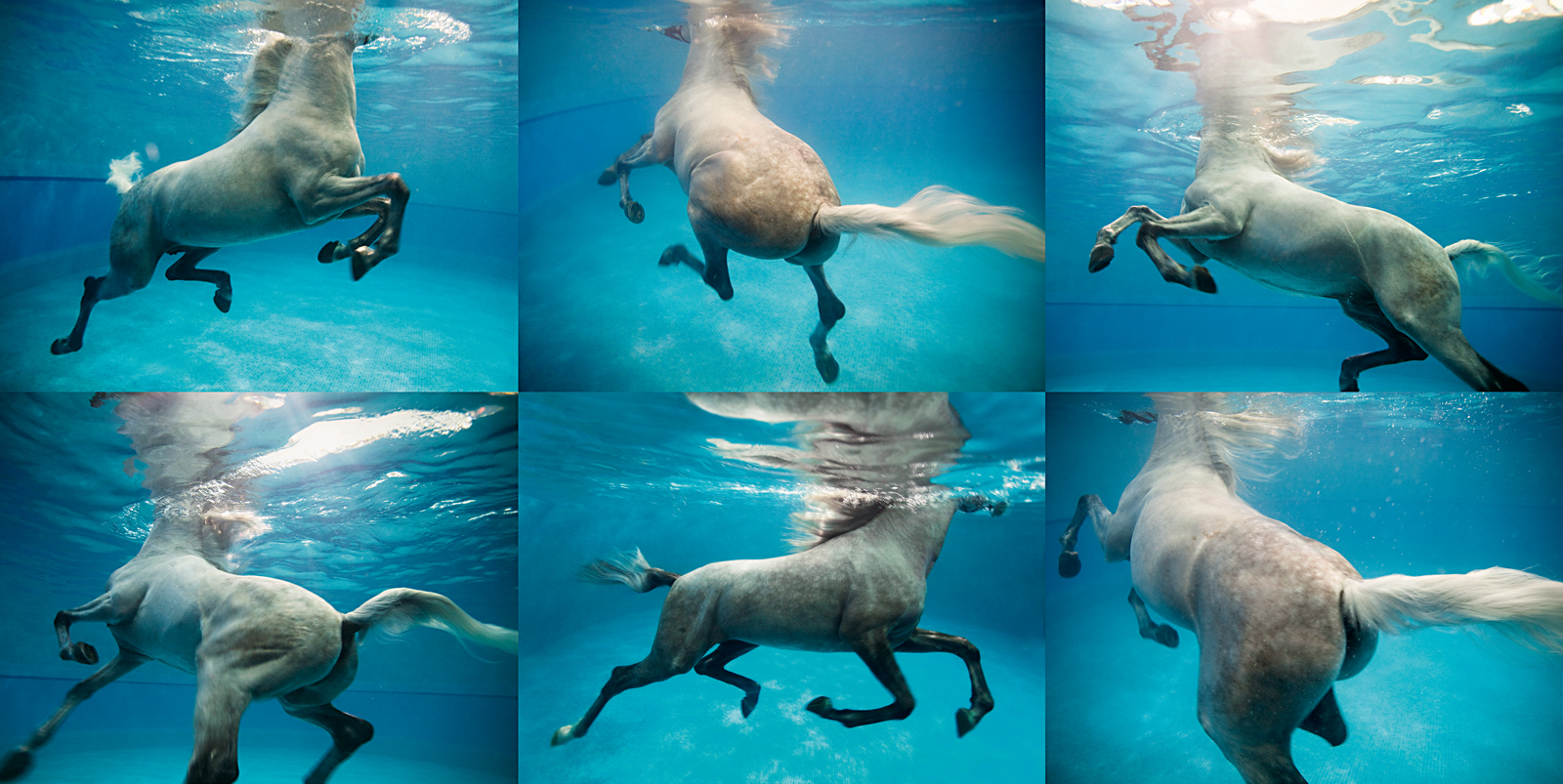